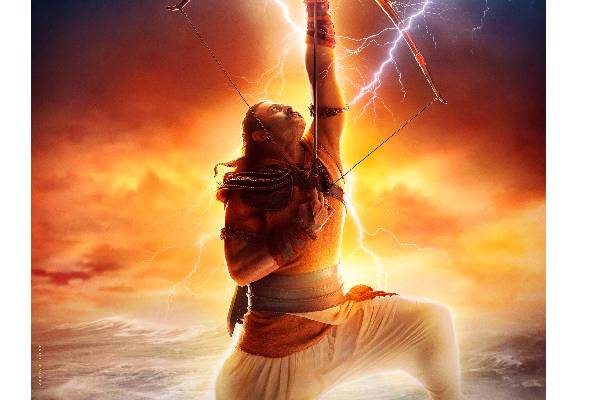 Prabhas is done with the shoot of Adipurush, a mighty film packed with grandeur and VFX. The film’s teaser will be out on October 2nd and a grand event is planned to release the teaser in Ayodhya in the presence of the movie unit. The teaser poster of the film is released today. Prabhas is presented as Lord Rama in the look of an archer in the poster. Prabhas looks like a beast in the released poster. The teaser of Adipurush will be out on October 2nd at 7:11 PM. The post-production work of the film is happening currently and the IMAX format version is being done in USA.

Om Raut is the director of Adipurush and Kriti Sanon is the leading lady. Saif Ali Khan plays the role of the lead antagonist. A major portion of the budget of Adipurush is allocated for VFX work. T Series and Retrophiles are the producers. The film will release on January 12th 2023 in Telugu, Hindi, Tamil, Kannada and Malayalam languages. UV Creations will release the film across the Telugu states. Prabhas resumed the shoot of Salaar and he will complete the shoot of the film by the end of this year.