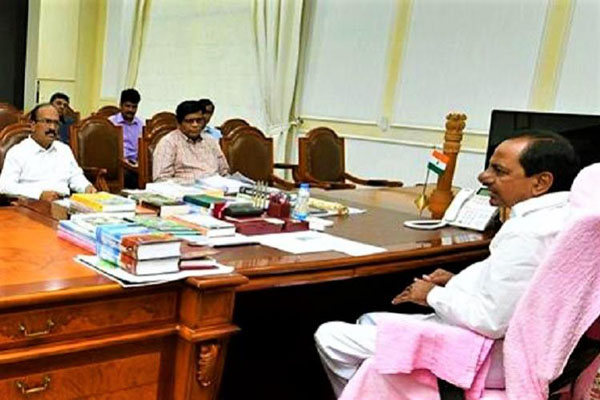 Amidst reports of large scale irregularities in Intermediate results, 19 students reportedly committed suicide. KCR government is caught in a political storm over the results scam as there are reports of management of Globarena, a private company that was given the contract for processing the results, is linked to high-level ruling politicians. The abnormally significant number of irregularities reported is causing heartburn among lakhs of students and parents. About a million students appeared for intermediate examination. Chief Minister held a high-level review yesterday and the government announced relief measure like free recounting and re-verification for all the failed students. Still, these measures failed to pacify the students. The ruling politicians busy in political management have allegedly lost control over the administration, the critics observe.

The opposition delegation called on governor seeking his personal intervention. The education minister is still in denial mode claiming that the concerns of students are only apprehensions and opposition is politicizing it.
Notwithstanding the claims of officials or their political bosses, the fact remains is that there is an abnormally high number of irregularities in the intermediate results. The secretary of the Board of Intermediate Education tried to dismiss the whole thing by stating that such lapses are common when a million students sit for the examination. This official response is not only irresponsible but misses the human element. For the Intermediate Board, they may be lifeless numbers. But, for every student and his or her family, it is lifetime agony if they fail due to the inefficiency of the system that too after putting such an ardours preparation. In both the Telugu states, intermediate is almost a life and death activity. Not just the children, the parents too sacrifice their time and money in these two years of education.

The prima facie investigation reveals that the goof up lies in the compilation and tabulation of marks data more than faulty evaluation. Only a thorough investigation would reveal whether it is a scam or professional failure. The officials acknowledge that there exists technical snag and it is attributed to a private firm, Globarena. This private firm was asked to do the processing of results. How is it acceptable to hand over such confidential work to a private firm? Why did the board which presides over the future of a million students each fail to equip itself technically to handle this work? The political links between the said private firm and the TRS first family are now hotly debated. Neither the government nor the ruling party has countered this giving credence to the allegations. Reports also indicate that the teachers and even the employees within the Board have expressed reservations over the technical competence of the private firm in dealing with such sensitive examination work that can make and unmake the future of lakhs of students.

Meanwhile, the admancy displayed by the officials of the board and the non-transparent manner in which they responded to the complaints of students is highly reprehensible. Instead of voluntarily responding to the students and parents, the officials used police force to let loose a reign of repression on the concerned students, parents, and well-meaning citizens who responded to the issue.

The government cannot absolve itself by hurling counter allegations that the opposition is making politics out of the Intermediate fiasco. The ruling politicians should realize that in a democracy, politics will always be there when the issues concerning the people are at stake. It is the primary responsibility of the opposition to mobilize the people disenchanted with the failures of the government.

The politicians have been busy in elections for over a year starting with the premature dissolution of state Assembly this obviously impairs the public administration.

Reports also indicate that internal bickering among higher officials of the Intermediate Board seems to have contributed to the prevailing mess.

Software glitches have come to the fore at the time of payment of fees. But, the officials failed to initiate action that would have averted the present chaos.

Several questions still remain unanswered on the contract given to the Globarena. There are allegations that there is no formal technical, financial or administrative agreement between the Intermediate board and Globarena. The processing of results was taken up by the private firm based on a mere purchase order. This raises several legal and administrative questions.

Some officials have even questioned the technical competence of the private firm even before the issuance of the purchase order. Even the education minister too acknowledged that internal dissensions within the Intermediate Board are also responsible for the mess.

Meanwhile, the state government has allowed for free re-verification and recounting of papers of those who failed in the examination. About 9.74 lakh students appeared for the intermediate examination and about 3.28 lakh failed.