After taking a decent start with $ 30K from its Thursday premiers, the collections improved phenomenally and registered on Friday and Saturday with $ 60 K and $ 106K respectively. With a decent run on Sunday, the overall collections have surpassed the $ 250K mark ensuring a safe zone for its buyers.

Considering Rajasekhar’s non-existent market in Overseas, this is a good box office run for the film. However, trade circles opine that few factors like audience not showing much excitement to watch Rajasekhar’s film and very limited screen count due to release of Hollywood film Thor have hindered PSV Garuda Vega from performing much better. Nowadays in overseas, with a good talk and positive reviews, films with no-name hero are surpassing $ 750K – $ 1M. So, on that factor, PSV Garuda Vega is not a big hit in overseas market.

The film, which was made on a limited budget, was sold in the range of 36 Lakhs in overseas. Distributors, exhibitors will make cool profits. 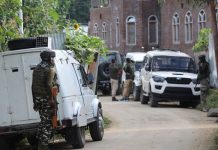