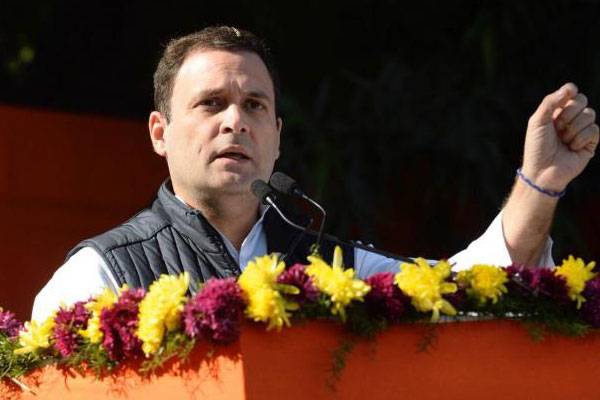 “Modi at the Centre and KCR in the state diluted laws meant to protect the land of tribals. The result is tribal land is being snatched for industrialists without proper compensation. Despite having so much land and forest, tribals here have no protection and their rights are consistently trampled upon,” said Gandhi.

He said the only job KCR government had done is renaming old Congress government projects and inflating their cost to enrich the Chief Minister and his family and friends.

“Wherever you go you can see how your Chief Minister has indulged in corruption. He had promised jobs to two lakh youths but the only one to get the benefits are his family and friends,” said Gandhi, while accusing KCR of plunging Telangana into debts.

“When KCR became the Chief Minister, Telangana had a surplus of Rs 17,000 crore but today it is reeling under debts of over Rs 2.5 lakh crore.

“On one hand KCR is burdening every family with debts, on the other hand his son’s income has grown by over 400 per cent,” said Gandhi, referring to KCR’s son K.T. Rama Rao whose annual income has increased from Rs 29 lakh in 2014 to around Rs 74 lakh in 2018.

Claiming that over 4,500 farmers committed suicide during the KCR regime, Gandhi pledged to cancel farm loans to the tune of Rs 2 lakh each and giving minimum support price (MSP) for 17 crops including Rs 2,000 for paddy, Rs 7,000 for cotton and Rs 10,000 for chillies.

He also promised setting up 30-bed hospitals in every subdivision and giving Rs 5 lakh to eligible families to build houses. He also assured setting up a tribal university in the state and preventing the privatisation of the Singareni coal mines.

“Without protection of farmers and jobs to youth, a state cannot progress. KCR made only promises but never bothered to fulfil them,” said Gandhi.

Ridiculing KCR for not fulfilling the promise of building 22 lakh houses, Gandhi said it was time for the Telangana Rashtra Samithi (TRS) chief to take rest in his “Rs 300 crore” house and let the Congress-led coalition work for the state.

Besides the Congress and Telegu Desam Party, the Communist Party of India (CPI) and Telangana Jana Samithi (TJS) are constituents of the People’s Front.

Elections to the 119-member Assembly are scheduled for December 7.