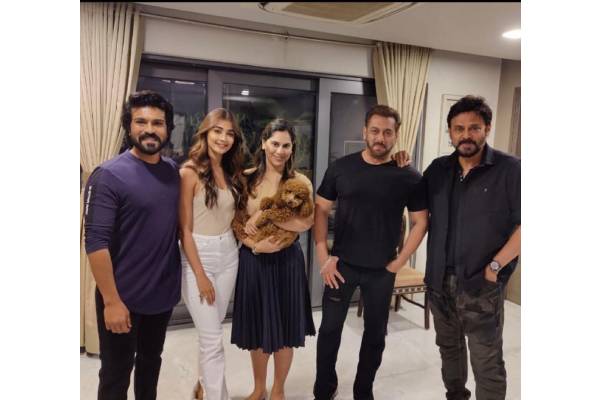 Farhad Samji’s next film, starring Salman Khan, has recently made headlines due to its intriguing casting. In addition to Pooja Hegde, Victory Venkatesh is said to play a pivotal role in the film. They began filming in Hyderabad and have already completed filming for a significant portion of the film. According to the most recent reports, Mega Power Star Ram Charan will play a cameo role in the film.

A picture surfaced on social media today confirming the same exciting news. Ram Charan hosted a party at his home for Salman Khan, Venkatesh Daggubati, and Pooja Hegde after the shoot.

According to sources, “Salman Khan was recently shooting for a larger-than-life song in Hyderabad when Ram Charan went to meet the actor.” It was at this point that they came up with the idea of Ram appearing in the song, which the actor graciously agreed to. “It’s an exciting number, mounted on a massive scale, and Salman and Ram’s camaraderie in it is worth watching,” a source close to the development says. Venkatesh is also on the same track.

Following the shoot, the stars enjoyed in the party hosted by Ram Charan. Ram Charan fans are overjoyed with this cameo news. As we all know, the Mega family and Salman Khan have a special relationship, and Salman Khan is doing a cameo role in Megastar Chiranjeevi’s Godfather.