Young Tiger NTR is one of the best dancers in Tollywood. His grace, style and speed while dancing are inimitable. In his upcoming film Aravindha Sametha, NTR is once again going to treat audience with his graceful dance moves.

After giving a glimpse of his stylish moves in Anaganagana song, the makers of Aravindha Sametha unveiled the promo of mass song Reddy Ikkada Soodu this Tuesday. The promo features NTR and Pooja cavorting quite energetically for the mass tunes of Thaman. The promo promises a dance-heavy number and the lead pair’s chemistry will definitely excite audience after they watch the full version of the song in the film.

The visuals are quite lavish as the special set looks very rich. The costumes are apt for the mood of the song. Aravindha Sametha, directed by Trivikram Srinivas, is hitting the screens on October 11th. 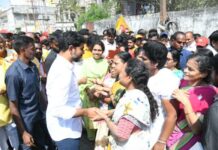