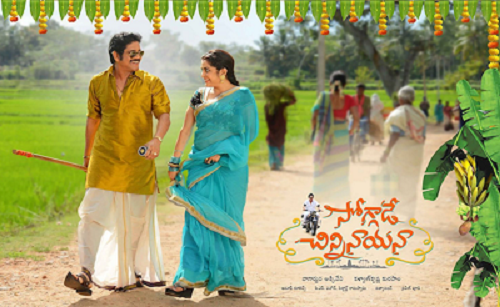 Akkineni Nagarjuna’s latest family entertainer Soggade Chinni Nayana has struck gold at the box office after releasing on January 15th. Nagarjuna is the show stealer with his stupendous performance in dual roles and the entertaining elements have struck the right chord and helped the film big-time to register mind boggling numbers in all areas.

The film is continuing its solid run in the second week and in Nizam, it is unstoppable. Even after 10 days of its release, the film is registering solid figures and chances of touching the 10 Crore mark are well and truly on. It will be a rare feat for Nagarjuna as no senior hero has ever recorded such a massive figure in the history of Tollywood. The Nizam rights were bagged for 6.5 Crores.

The film has a great chance of entering the 40 Crore club very soon. In Overseas, the total gross in nearing 800 K which is a record for any debut director. Kalyan Krishna is the director and Annapurna Studios banner produced the film. Ramya Krishna and Lavanya Tripathi are the female leads.