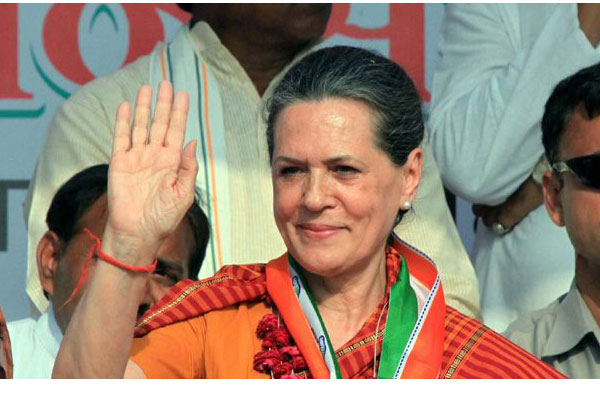 Today, amid speculation that Congress president Sonia Gandhi would step down and Rahul Gandhi would be anointed as AICC president, Congress Working Committee extended her term by one year. The Congress is in celebratory mood over its success in the rolling back of the controversial Land Acquisiton bill by Modi’s NDA government.The following is the text of her speech in CWC meeting held at 10, Jan Path, New Delhi.

I welcome you to this meeting of the Congress Working Committee. We last convened barely two weeks after the Modi Government had first promulgated its draconian Land Ordinance. For reasons best known to it, the Modi-Government chose to disregard the will of Parliament and displayed an inexplicable hurry to snatch lands from our farmers.

Thanks to our Party’s sustained campaign, the government has been compelled to withdraw its anti-farmer amendments. The credit for this goes to every worker of the Congress Party, who under Rahul’s active guidance, carried out a sustained agitation. I should make a mention of all like- minded political parties and all members of civil society who joined hands with us in this fight. It goes without saying that lakhs of farmers across the country tirelessly demonstrated and agitated against this Ordinance. Even today they are under great distress because of excess rain or drought conditions, yet no adequate relief has reached them thanks to the Modi-government’s insensitivity to their plight.

Similar campaigns will now need to be mounted against the assault on tribal welfare,onwomen and child welfare, on labour laws, on laws that protect the environment and forests, on RTI and on our flagship initiatives MGNREGA which are being systematically undermined.

The U-turn on the Land Ordinance is evidence that the government is out of touch with ground realities. It has become painfully clear that most of the pledges made by the Prime Minister during his election campaign were nothing more thanhawa baazi. The Modi Government has failed abysmally to match words with deeds, to match media events with actual accomplishments, to match headlines with substance. The economy is on a downward slide while prices continue on their unrelenting rise. As for promises such as the creation of jobs or slogans such as Make in India, the less said about them the better. The autonomy and integrity of vital institutionswhich have stood the country in good stead are being systematically eroded. Writers and progressive thinkers are being physically eliminated. The media is being threatened with notices and other repressive measures. History is sought to be rewritten with special targetting of Jawaharlal Nehru, the architect of modern India and builder of democratic institutions.

This should hardly come as a surprise to us. The country last week was given clear evidence of what has been obvious for a long time—that the Modi government is controlled and directed by the RSS, whose agenda is well known to all of us. The security situation in our neighbourhood has deteriorated considerably. Our jawans and civilians are being increasingly targeted. Instead of a coherent policy on Pakistan , this government can’t seem to make up its mind on what it should do. From aggressively mocking Dr. Manmohan Singh and his policy during the election campaign, the Prime Minister has been reduced to unedifying flip-flops casting doubts on what he really stands for.

The Congress party has always been and will be accountable to party workers and to the people of India. And today we have gathered to deliberate on another important agenda. Our priority must be to strengthen our existing support base and actively reach out and win the confidence of new constituents.

To successfully implement these initiatives we will need to bolster organisational institutions right from the grassroots level. The party unit which is closest to the people, the Block Committees and Booth Committees, must be sufficiently empowered. As we are embarking on registering new members, we have to ensure that our internal processes and systems are sufficiently robust to recognize, reward and nurture talent. A transparent mechanism to recognize and reward hard working and performing workers should be institutionalized. As a party we have always championed the rights of the marginalized sections of society such as women, adivasis, dalits, minorities and OBCs. It is onlythrough affirmative action that we will guarantee greater say in the working of our party to these sections of society.

The proposed amendments to our Constitution, which have been circulated to you, were first presented to this committee on 13th January 2015. They were a result of extensive deliberations guided by the Vice President. I believe these proposals reflect the opinion of a large number of party workers and are built upon our continued commitment to inclusion and empowerment. These amendments will require some time to be implemented, but once done they shall go a long way in making our party institutions truly responsive and equip it to face the challenges that lie ahead.

Let us now proceed with the Agenda.