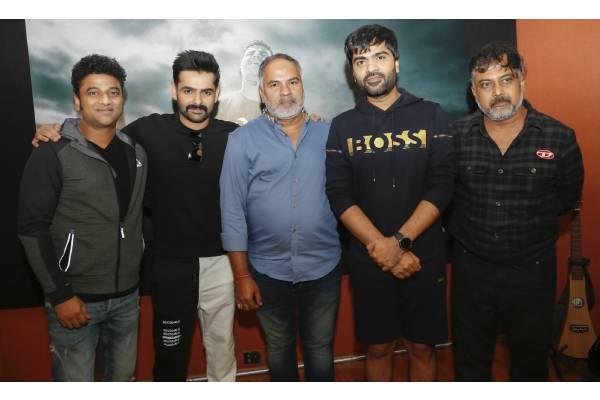 The Warrior, which is RAPO19, is being directed by ace filmmaker N Lingusamy. The makers today released a new poster that has given a pleasant surprise to the fans of Ram Pothineni.

Yes, it featured Kollywood top star Simbu with the team members of The Warriorr and announced that STR has lent his voice for a song in the fim.

According to sources, the song has been titled Bullet and music composer Devi Sri Prasad has created it as a pulsating number.

For the first time, Ram Pothineni will be seen as a police officer in The Warrior. The film, a Telugu-Tamil bilingual, is being made on a lavish budget by Srinivasaa Chitturi under Srinivasaa Silver Screen banner. Pavan Kumar is presenting the movie.

Aadhi Pinisetty is the villain, while Krithi Shetty is playing the female lead and her name is Whistle Mahalakshmi. Akshara Gowda will be seen in a crucial role. Music by Devi Sri Prasad is said to be one of the highlights of The Warriorr.