Chi La Sow is an upcoming entertainer starring Sushanth and Ruhani Sharma in lead roles. Music for the film is composed by Prashanth R Vihari and direted by Rahul Ravindran.

The album begins with a funky number Down Down which has interesting lyrics by Kittu Vissapragada. Kala Bhairava and Ernest Abraham do a commendable job with their fresh vocals. The live drumming,acoustic guitar is quite groovy and appealing blues aura is worth mentioning. Prashanth interestingly fuses the Indian flavours as well in between which is fantastic to hear.

Mellaga Mellaga is a sublime melody by Chinmayi Sripada with acoustic guitar and mild strings make it an adorable melody. The interludes are fantastic to hear with great chord progression and the entire song has a new age appeal to it. The lead guitar also brings an added flavour to the entire composition. However,it is Chinmayi who is the star of the song with her amazing presence.

Varshinche is a progressive solo sung by Abhijit Rao and Prakash Chodimalla which has gripping electric guitar coupled with trance beats. The song has a great blend between new age music to Indian melody and a bit of electronica as well.

The title number Chi La Sow offers a funky ending for the album with Jazzy rhythm blended with disco beats. Kittu Vissapragada once again takes on marriage and youngsters opinion on the same. Diwakar, Chinmayi and Pranav bring the song a youthful appeal and enjoyable aura.

Chi La Sow is a classy album and delivers what it is expected of. 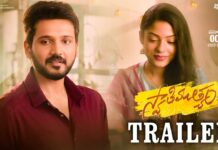