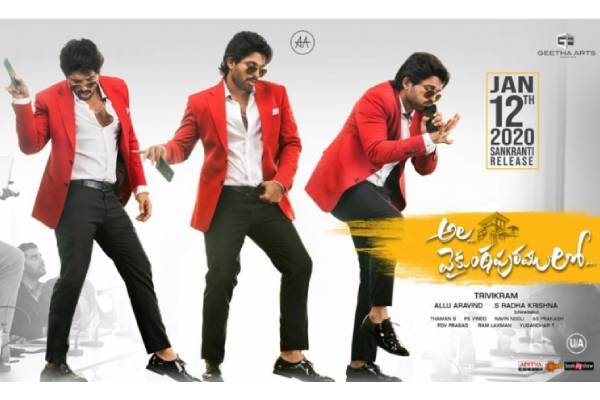 Valmiki ( Murali Sharma ) swaps his new born baby with his millionaire boss Ramachandra( Jayaram)’s baby, in a hospital. Only evidence for the swap is a nurse who goes to coma after the incident. Valmiki, a middle class dad, raises his boss’s son Bantu (Allu Arjun ) and ensures the boy never goes near the original parents who live in Vaikunthapuram ( The palace name) .  After more than 20 years, Bantu learns about his original parents. Bantu then enters vaikunthapuram, rest of the story is how he resolves the issues his parents’ family is facing.

After establishing the premise of baby swapping, director Trivikram simultaneously narrates a middle class family life style, a rich family problems until the protagonist knows about his original parents. Being from middle class family, Bantu’s struggle with his dad Valmiki ( Murali Sharma) has been established in lighter vein manner. On other side, millionaire Ramachandra (Jayaram) struggles as their son ( Sushant) struggles to look after their businesses . Amulya ( Pooja Hegde ) runs a tourism company , Bantu joins her as assistant.  They start liking each other, meanwhile Ramachandra family come across Amulya’s business profile and wants her as their daughter in law.  As Amulya’s greedy father ( Tanikella Bharani) okays the match Amulya is engaged with Ramachandra’s son ( Sushant) .Meanwhile Bantu learns his past, aims to join the millionaire family and also makes  Amulya’s engagement void.  By interval, Bantu enters the Vaikunthapuram.

First half of the film has ample elements to appeal family audience. Trivikram did not try to generate his trade mark comedy but sticks to the core story without any deviation. Butta Bomma’ song is the good one from first half. Allu Arjun, Pooja thread is cool. Surprisingly, the poetic narration of super hit song Samajaragamana didn’t show up on the screen.

Second half revolves around Bantu fixing the problems within the family.  Jayaram – Tabu ‘s broken relation he fixes , also he takes care of villains who demand share from millionaire Ramachandra’s companies. In Second half more comedy elements have been tried and board room comedy sequence in which Allu Arjun imitates all cinema heroes came out well. Last song ‘ Ramulo Ramulaa ’ is very energetic and best song of the film.

On flip side, villains’ thread is poorly written. They keep on visiting the millionaire’s home or office every now and then but things doesn’t move anywhere. Sushant characterization is half baked one.  Second half has some clichéd narration.

Allu Arjun has excelled as Bantu. He neatly delivered performance as middle-class youngster as well as in the second half. After taking a long break, Allu Arjun delivers in a tailor made role. Pooja Hegde is perfect fit for Amulya Role, Nivetha pethuraj fits the bill as sushant’s love. Murli sharma plays most vital character of the film, he did good job as always. Tabu , Sachin Khedeker , Jayaram , Rohini and Navdeep are the other key artists . Rajendra Prasad, Suneel , Vennela Kishore and Rahul Ramakrishna tries comedy division . Samuthirakani , Ajay play villain roles

Flat Narration and clichéd second half

Ala Vaikunthapurramuloo delivers what it promises. A neatly packaged family movie that never goes overboard. While Trivikram mark comedy punches are missing, he makes it up with good dialogues. A Sankranthi movie you can watch with your family.