Some novelty amidst familiarity in Shivam – Director Sreenivas Reddy 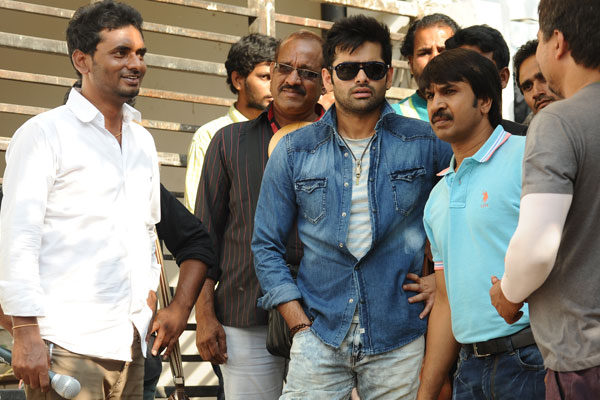 Sreenivas Reddy, the director of Ram-Raashi Khanna starrer Shivam, was a good academic student before he came into the industry. Studying responsibly and yet keeping his love for cinema understated, he was always game for opportunities. Being in Nellore was very ideal for him, as he was exposed to Tamil and Telugu cinema on an equal measure. Angrez was his first as an assistant, before he joined Surender Reddy’s camp. His confidence increased, thereby with the influences around and working in films like Kick, Ooseravelli and Race Gurram, the commercial sensibilities in him grew. He dreams of directing Allu Arjun one day. But, he wants to deliver a hit before that happens. The director in an exclusive conversation with Telugu360.com assures there will be novelty even in a commercial entertainer like Shivam. More into that below.

I have completed B.Tech from SV University and have no filmi background and influence of anyone. I would watch films on weekends three shows without a break on the same day. My grandfather would fund me and my parents didn’t know about my movie watching spree. I would spend my Sundays in the three theatres and this was when I was studying 8th and 9th standard. My father was a contractor, mother, a housewife. What started as a time pass, became an interest, hobby and then a passion. Even while watching so many films, I stood first in the school. While I used films as recreation, my peers spent on something else. In college later on, if I wouldn’t watch a film I would feel restless. I would jump walls to go to films. My family would get complaint letters that I was bunking college but my parents never believed the college authorities because my marks were exemplary. Later on, I began selecting films for viewing.

I watched too many Ajith films, as Nellore where I studied had a lot of Tamil influences. Especially Vaali by SJ Suryah. That was when I started thinking about the director as a great narrator. I would discuss with friends about an auteur like Karunakaran, Suryah more than the artistes. I would read their interviews where they would say that their life revolved around films. While I was studying in Tirupati, everyFriday I would go to Chennai watch films and make efforts to join the industry. I was advised by people to finish my studies first and then pursue a film career. My family still didn’t know about my fetish for cinema and neither did I let them know. I got a job in Hyderabad but didn’t join lest I might get stuck in academics. I nevertheless moved to Hyderabad convincing my parents that I am interested in higher studies but actually began looking for opportunities to become a director with a B. Tech resume on hand. I stayed put in Srinagar Colony as I thought that was the place many film people lived.

I joined Angrez as an assistant director to Kunta Nikhil. It gave me a superb experience. I joined as a last assistant and finally ended up as a main assistant. Started learning what a film is, how many departments are there in it, the hierarchy etc. I worked hard and I learnt the structure and business of film making. It became a success and we followed it up with Hyderabad Nawabs. I started implementing what I learnt in Angrez and it gave me a lot of confidence. I did small films after that and was summoned by Surender Reddy when he was looking for an associate. Art director Narayan Reddy recommended me and I worked on Kick, Ooservalli and Race Gurram. I got a complete picture after I joined Surender Reddy’s team. I would read plenty of books on screenplay. I also realised book knowledge and what you learn from institutes is totally contrasting to what you learn practically. When they join the sets, they are completely confused. Direction is about creativity, and Seinfeld, the screenplay writer says if you have the capacity to cheat audience, you don’t have to follow the rules in his book.

Till then I did small budget films, but when I joined Surender Reddy, the scale of film making grew and so had my thinking capacity. Freedom grew in aspects of creativity, the span grew and I began writing. Surender Reddy has a habit of changing assistant directors with every movie. I was the only one who stayed on with him for four films. Even while I was working there, I started writing my script in the nights keeping Bunny on my mind. I thought later I must first deliver a hit and then approach him. I like commercial elements, mass, crazy dialogues. With Surender Reddy, there was a perfect wavelength and sync. The dialogues that I had written for a few scenes worked big time and the director liked it. I can’t write in poetic way like certain directors, but I can manage colloquial dialogues with satire well. It is just about the treatment of the dialogues and the director would ask me to write a few dialogues for certain scenes. In Race Gurram, I had written the interval dialogue. It felt good that my dialogues were accepted for thirty five plus crore films. When I saw the response onscreen, I felt good. In story writing we can’t go beyond the limit in Telugu cinema. If we want that way, we shouldn’t go to a commercial hero, we should go to new hero. If you go with commercial hero you should do films as per the expectations of the audience.

If you try something new, it takes time for people to register it on their minds. So for Shivam, in the commercial film format, I avoided the regular and routine points and added new points. A hero should love the heroine, a hero should fight the villain is standard, we can only change reasons. So when I added a new reason, the fresh look became very evident. A few friends gave a good feedback, I narrated it to a hero but had to change the hero as there was a small issue and producer Sravanti Ravi Kishore called me. Ooseravelli was supposed to take off with Ram, it happened with NTR due to some disturbance. At that time, I knew Ravi Kishore. He asked me for a script but by then they started Masala. So, I told the story to Nitin and since it didn’t happen with him, it came back to Ram. I went with a bound script and dialogues. The shoot went on comfortably. You will enjoy the novel point in the film though the format is regular. Revealing it will be like killing the soul of the movie.