Ravi Babu Back with an Innovative Concept: 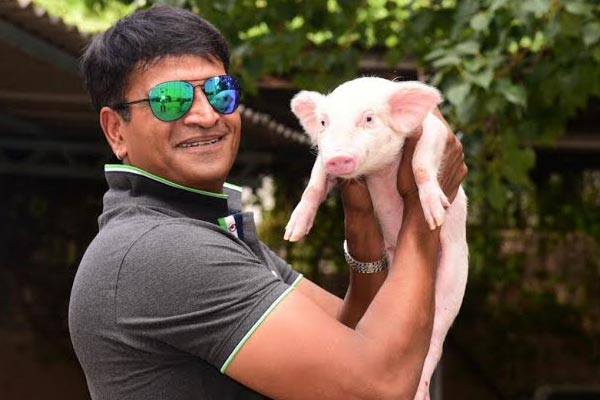 Ravi Babu holds a special place in the hearts of Telugu audience for his innovative films like Allari, Anasuya, Nachavule and Avunu. His movies lack huge budget but they have enough content to impress the audience. Some of his recent movies Laddu Babu and Avunu fell flat at the box-office and the actor has taken an enough gap and he is getting back with his next film.

The movie is said to have a dissimilar concept and it has been titled as Adhugo. Surprisingly, a pig played the lead role in the movie which completed shoot recently. Though Ravi Babu faced enough challenges, he wrapped up the film on time and on the planned budget. Sources revealed that many of them criticized Ravi Babu after making a film on a pig, however the talented director is quite confident about Adhugo.

Abhishek and Nabha played the lead roles in the movie and they have been making their debut as actors with Adhugo. The movie’s principal shoot has been wrapped up and Ravi Babu is busy with the post-production work. Sekhar Chandra composed the music and the audio of the movie will be unveiled during August. Suresh Babu’s Suresh Productions is presenting Adugo and Ravi Babu produced the film on Flying Frogs Entertainments banner. Adhugo is all set to hit the screens during September this year.