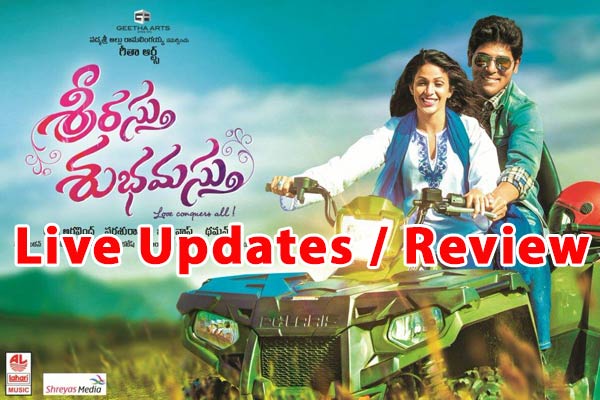 Stanford MBA Graduate, American aviation academy trained pilot, ultra-rich young entrepreneur Sirish (Allu Sirish), on his business trip to Kashmir, rescues Anu alias Ananya ( Lavanya Tripathi) from a trekking accident. Since Anu was unconscious at the time of rescue, she isn’t aware of who rescued her, but Sirish falls neck-deep in love with her.

Anu is a daughter of middle class person Rao Ramesh , Tanikella Bharani is their family friend who helps them financially for years. After Anu completes her education, Bharani wants to convert their friendship to relation, expresses his interest to make Anu his daughter in law. Delighted Rao Ramesh agrees, also gets nod from his daughter.

Meanwhile, Sirish reveals about his love ( with Anu ) to his dad ( prakash raj ) who hates middle class girls and hence rejects their love. Sirish challenges with his dad that he will win the girl’s love without revealing his rich background.

Rest of the story is about how Sirish succeeds in winning back his love.

Srirastu Subhamastu story is as old as Charminar and narration is monotonous. Telugu film industry, in last one decade, has seen such story and screenplay umpteen times. In second half, hero enters into heroine’s family after her marriage is fixed with someone else, and then tries to impress her elders.

However, even in such routine story, what stands out positively is director and writer parasuram’s skill as dialogue writer. Especially in second half of the movie, Parasuram has conceived two great scenes between the lead cast. One is between Rao Ramesh and Sirish, followed by Prakash Raj and Sirish. Thus, towards the climax movie has its strengths shown in terms of sentiment scenes. Ali, Subbaraju comedy is little relief in second half.

In this relaunch attempt of Allu Sirish, the producers should have opted for a fresh story or treatment. However, Allu Sirish has looked way better than his first innings but his expressions in love scenes really trickle our funny bone. He must improve in this area to succeed. Lavanya Tripathi is just OK as heroine; Her lip sync did not match.

Another positive point is, despite typical formula film, this movie won’t bore you much. With no positive or negative spikes, the narration flows just like that. This movie will appeal to those who like sentimental movies. While the pre climax scenes are pretty good, climax is too cinematic. Another plus is the characterization of all primary cast is good.

Songs: There are only three songs in the movie, only one (the title song) is good on screen. More songs would have increased the appeal in youth.

Srirastu Subhamastu is a clean family movie which can be watched once by ladies and families. However, overseas and multiplex audience may find it difficult to swallow. This movie may not give Allu Sirish a much needed break but will make him nearer to family crowd to some extent. At Box-office, with the strong marketing by Geetha Arts, will this movie survive or not ? We need to wait and watch !