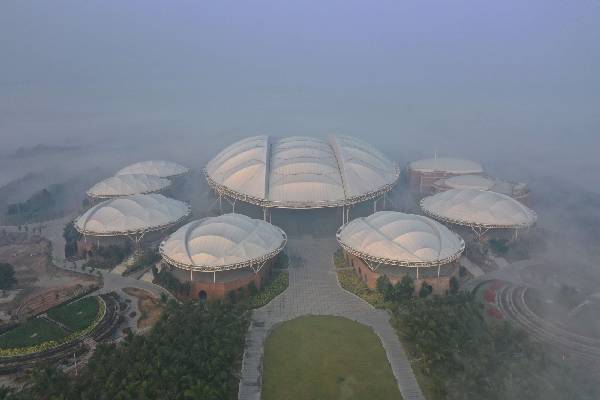 A modern tissue culture laboratory to help propagate critically endangered plant and tree species in the country has come up at Kanha Shantivanam on the outskirts of Hyderabad.

This project by Heartfulness Tree Conservation Centre was inaugurated by Union Agriculture Minister Narendra Singh Tomar on Wednesday. While Heartfulness Institute aims at growing the plantlets at the ashram, a good share will also be given to the forest department, NGOs, and other plantation bodies that are involved with afforestation in India.

In his remarks, Tomar said that Kanha Shantivanam is very inspiring. “It is the centre for spirituality, which is important for human life’s development, continuity and durability. We all know that for humans with spirituality, deeds are equally important. So, when spirituality and deed stands together a creative power emerges. During my visit to the Heartfulness centre, I feel under Daaji’s guidance and vision. The ashram makes you feel like being touched by nature,” he said, adding that protecting nature’s beauty is everyone’s responsibility.

The minister said after his visit, he realised that species which are getting endangered can be saved and further developed which would create employment and bring revolution in agriculture as well.

Heartfulness guide Daaji claimed that much before the West proved that plants are living beings, the Vedic knowledge had always recommended putting trees ahead in priority. “Many trees are not only worshipped but also find a spiritual significance in Indian culture. Our proprietary medical knowledge is also plant-driven and trees have always been given their due as revered species in most parts of the country. By safeguarding the many species of plants, it is only a minuscule effort in the direction for the benefit of our future generations and the overall ecosystem,” he said.

The Heartfulness Tree Conservation Centre has a 5,000 square feet facility with 10,000 cleanroom technology, 15,00,000 annual sapling production capacity with the finest equipment and infrastructure with the tissue culture processes being overseen by a team of experts from India and Israel. More experts will be joining the team in the next three months, Heartfulness Institute said.

At least five endangered varieties are propagated at the rate of 1.5-2 lakh saplings per year per variety by the Heartfulness Tree Conservation Centre. The raw material sources are obtained from native locations of the endangered species with the help of the Forest Department. Elite plant materials are obtained from fields of Kerala, Assam, Andhra Pradesh, Tamil Nadu and elsewhere.

Kanha Shantivanam already has ongoing conservation projects such as the Rainforest Project, the Deccan Plateau Project, the Food Forest Project and the Yatra Garden with volunteers helping in mass plantations. So far over 6 lakh trees have been planted and more than 10,000 trees saved through translocation efforts and an in-house nursery that has over 6 lakh varieties of saplings.

The have resulted in impacting the microclimate of the region in a very positive way transforming a once barren stretch of land to a fertile green oasis resplendent with a variety of flora and fauna not seen before in the region, the institute said.