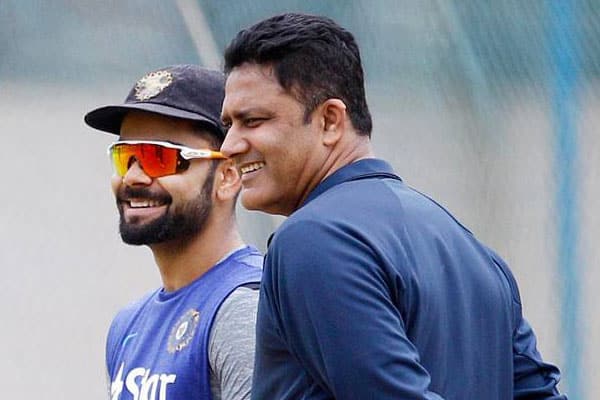 India captain Virat Kohli has got an all clear in administrative manager Kapil Malhotra’s report on his differences with coach Anil Kumble, which primarily led to the former leg-spinner’s exit after the Champions Trophy.

While the administrative manager’s report is mandatory after every home or away series that India plays, it is usually perceived as a formality.

In the wake of Kumble’s resignation though, the BCCI had specifically instructed Cricket Club of India (CCI)’s Malhotra to report any incident of discord between Kohli and Kumble when the team was in England.

However, it has been learnt that Malhotra’s report does not have mention of any controversial incidents.

Also Read: New India Coach to be Selected on July 10

“Kapil Malhotra has submitted his report. At least there is nothing in the report which suggests that skipper Virat Kohli was ever rude to the coach or mention of any incident which could be termed as a breach of discipline,” a BCCI source said on condition of anonymity.

When pointed out that coach and the captain were not interacting with each other during practice sessions, the official replied: “He was specifically asked to mention any incident worth reporting which may have affected the dressing room environment or morale of the team. Nothing of that sort is there in the report.”

It must be noted in this regard that BCCI has also sought reports from Anil Patel, who was the administrative manager during the 13 home Tests that India played during the season.

Malhotra is currently with the team in the West Indies and this will be the last assignment of any state unit official as administrative manager.

The administrative manager for West Indies tour was supposed to be Milind Kanmadikar of Madhya Pradesh CA but it was decided by the Committee of Administrators (COA) that Malhotra would continue for the West Indies leg.

It is expected that the board will hire a full-time manager, abolishing the convention set by the old guard of handing overseas ‘junkets’ to the state unit officials in order to keep their vote bank intact.

The BCCI is all set to conduct the coaches’ interview in Mumbai on July 10 with Ravi Shastri emerging as the favourite to come back.

The other two high-profile names are Virender Sehwag and Tom Moody. Richard Pybus, Venkatesh Prasad, Dodda Ganesh are the other candidates.