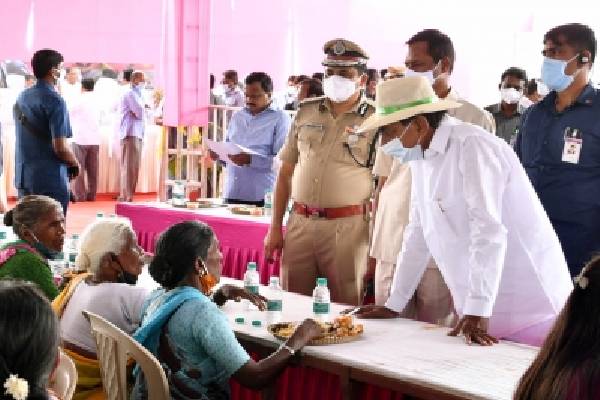 Some villagers thanked him for hosting the lunch, while others briefed him about their problems.

KCR, as the Chief Minister is popularly known, was seen serving food to women sitting next to him.

The lunch with about 20 food items was hosted for all 2,600 people of the village and about 300 officials and police personnel deployed as part of the Chief Minister’s visit.

Later, addressing a public meeting, KCR described the village as his family.

He directed the District collector to gather details of all families in the village and the problems faced by them.

KCR vowed to work for the welfare of all families irrespective of their religion, caste, and political affiliation. He assured the people that the village will be transformed into a golden village in next one year.

He also announced Rs 25 lakh as special fund for each of 421 gram panchayats, Rs 1 crore for Bhuvanagiri municipality and Rs 50 lakh each for five other municipalities in the district.

The Chief Minister urged villagers to work for two hours every week for the development of the village. He advised them to constitute committees to oversee sanitation, agriculture, plantation and other programmes.

Last week, he had called up sarpanch Pogula Anjaneyulu that he would host lunch for the entire village.

It was in November last year that the Chief Minister had decided to adopt the village and promised all support for its development.

This was the fourth village adopted by KCR. He last week announced that he will adopt an entire district to show how rural and urban development can be achieved.