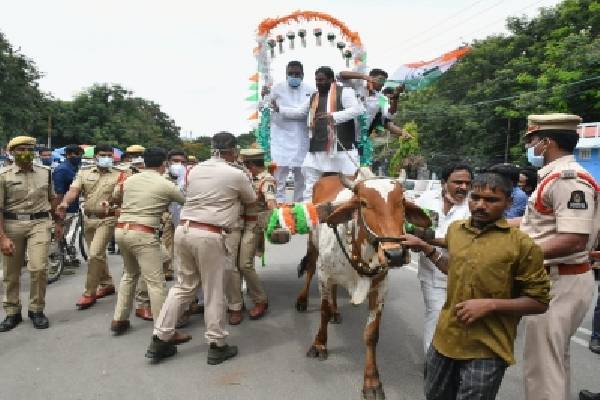 The incident occurred in Medak town of Telangana on Monday when the he was riding a bullock cart as a mark of protest against the hike in prices of petrol and diesel.

Rajanarasimha, who was addressing the protestors by standing on the cart, lost his balance and fell down along with couple of other leaders when the bull suddenly panicked in the crowd.

The senior leader sustained minor injury on his leg and he was given first aid. The bullock cart was apparently overloaded with protestors.

Party’s state working president Anjan Kumar Yadav and some other leaders were detained by the police during the protest near Indira Park in Hyderabad.

The former MP had reached there with bullock cart when the police stopped him. There was an argument between the protestors and police. The police officers said there was no permission for the protest at Indira Park.

Anjan Kumar Yadav condemned the police action. “We were protesting peacefully with bullock cart and cycle rally to show that common man can’t afford to buy petrol and diesel to use their motor vehicles. We were not disturbing anybody but still the police resorted to the arrests,” he said.

State Congress president A. Revanth Reddy led the protest in Nirmal town. Large number of Congress workers received Revanth Reddy on his first visit to the town after taking over as TPCC president.

Congress Legislature Party (CLP) leader Mallu Bhatti Vikramarka led the protest in Khammam. Speaking on the occasion, he demanded immediate withdrawal of hike in the prices of petroleum products to ease the burden on common man. He said the Congress party will continue to fight against the anti-people policies of the state and the central governments.

Who will direct Venky’s Next?