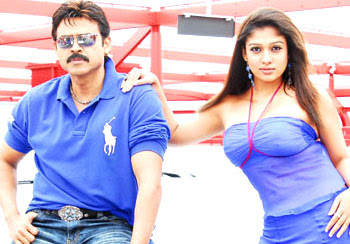 Victory Venkatesh has zeroed in on his next project. Venkatesh, who is enjoying the success of Drishyam is teaming up with Nayanatara for a film which will be directed by Kranthi Madhav of Malli Malli Idi Raani Roju fame. Seasoned producer Paruchuri Prasad will be producing this film on his United Movies banner. Paruchuri Prasad earlier produced Venkatesh’s Shadow. This film is likely to go on to sets in the month of August.