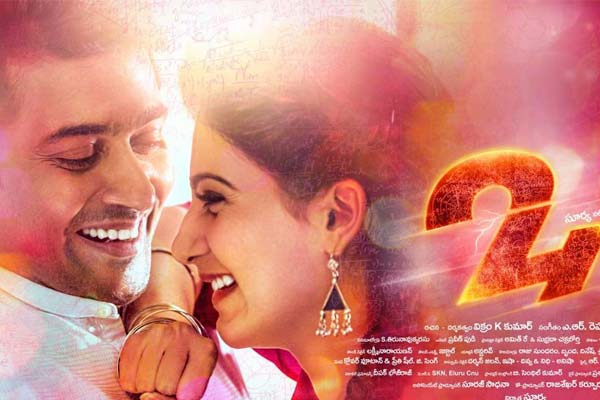 Kollywood superstar Suriya’s most awaited flick ‘24’ is all set for the grand release. Amidst the huge hype and expectations, this film is going to check it’s fate at the box office tomorrow.

‘Suriya’ who has garnered an universal fame in both tollywood and kollywood, has a stupendous market and following in both the states. Suriya who is teasing his fans and cinegoers till date with the series of posters of his upcoming film, seems to be pretty confident about the outcome of the film. Suriya who has played three roles in this film is going to enthrall the audience to the core with his performance. This film which comes under the genre of scientific thriller, has many surprises for the audience. Vikram Kumar’s style of presenting this film seems to be the major highlight of the ‘24’.

The VFX and graphical extravaganza is not only going to enthrall the audience but is also going to take them into another world. The teaser and the trailer has garnered a lot of curiosity on the film. Have to see how far this film enthralls the audience at the box office tomorrow.

‘Samantha’ and ‘Nithya Menen’ plays the female leads in this film and the Oscar Awardee ‘A.R Rahman’ has scored the music for this film. ‘Suriya’ is producing this film under his own banner ‘2D Entertainments’.