Switch to: తెలుగు
Home Movies Movie News Vikram Records Are Because Of The Audience: Kamal Haasan 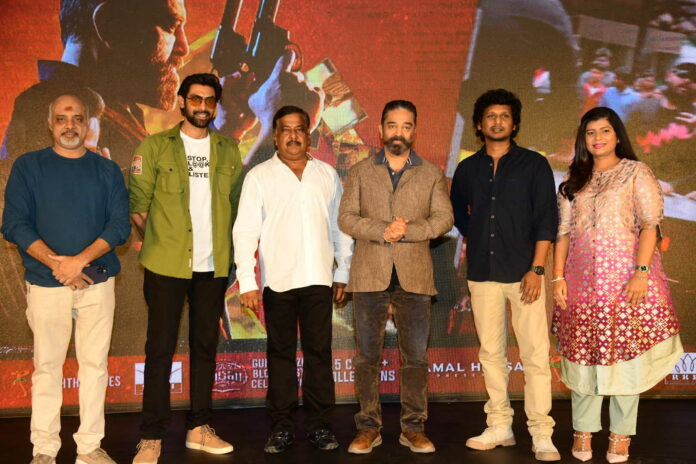 Universal Hero Kamal Haasan’s Vikram is a blockbuster hit. The movie has collected over 25 Crore in its first week itself and is going strong in its second week as well. Kamal Haasan and the unit attended the success meet in Hyderabad which is graced by Rana Daggubati.

Speaking at the event, Rana said, “In recent times, ‘Vikram’ is the only film which I watched in two languages on the same day. I went to the RK Cineplex near our house in the morning. I saw the Telugu version there and again I saw the Tamil version on Prasad Imax. We learned about cinema by watching Kamal Haasan. Director Lokesh Kangaraj portrayed him in a very cool way. Congratulations to Vikram team. ‘Vikram’ is an amazing film”.

Kamal Haasan thanked Telugu audience for the massive success. I am very happy to give Vikram movie to ‘Shreshth Movies’. Vikram got very close to the audience due to Nitin and Sudhakar Reddy. Due to this, it was released in many theaters and was heavily publicized. Giving this movie to Sudhakar Reddy, I told him to take care of our child. Sudhakar Reddy made the child a record-breaking child. Lokesh Kangaraj shot Vikram superbly. Rana appreciated my films even if they did not do well. Wonderful technicians worked for Vikram. I am happy that all the characters in the film have a good name. Vikram was greatly admired by the audience.

Vikram’s victory once again gave me a great impetus. Everyone is enjoying the movie and are saying that we are looking at repeat. Such compliments inspire to make more such films. Big thanks to the audience for making Vikram the biggest success. No matter how many records Vikram has achieved, it is because of the audience. This success is not possible without you. You must support all good movies not my movie”.