BJP MLA from Rajahmundry Urban Assembly segment Akula Satyanarayana is all set to join the Jana Sena. He is planning to resign BJP on January 21st and join Janasena on the same day in the presence of Pawan Kalyan. Akula Satyanarayana told that he will be resigning to MLA post also and sending his resignation letter to the AP Assembly Speaker Kodela Sivaprasad.

Akula Satyanarayana explained the reasons for quitting BJP party. He told BJP led center failed to fulfill the promises made to AP like sanction of a railway zone at Visakhapatnam, a steel plant at Kadapa and Dugarajapatnam Port at Nellore – despite all of these are incorporated in the AP Re-organisation Act, 2014.

So, as per his statements, it looks like it is payback time for Akula Satyanarayana by working hard for Pawan’s party. We will have to wait and see whether Akula will win from Janasena too or not in 2019. 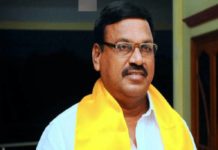