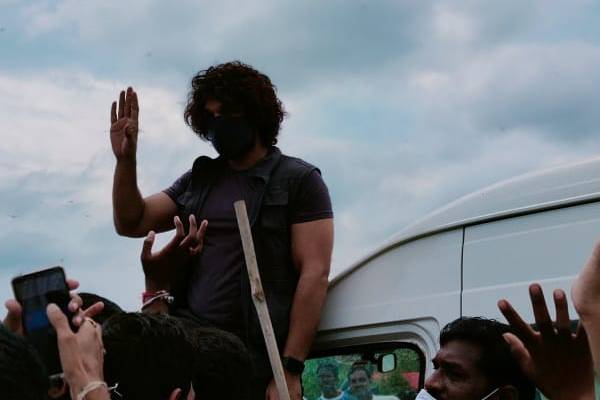 Stylish Allu Arjun was mobbed by his fans during his recent visit to Tipeshwar Wildlife Sanctuary. The actor’s look went viral all over and the pictures are all over the internet. Allu Arjun also visited Kuntala waterfalls during this weekend outing. There are talks that Allu Arjun was personally scouting for some of the locations for his upcoming project Pushpa. The actor landed into trouble after the officials of the Right to Information Act filed a complaint with the Neradikonda police in Adilabad district for violating the rules during the coronavirus times.

The complaint said that the Kuntala waterfalls and Tipeshwar Wildlife Sanctuary are closed for public because of the pandemic but Allu Arjun along with his friends violated the rules. The cops accepted the complaint and a case would be registered after the primary investigation would be done. Allu Arjun is all set to commence the shoot of Pushpa from November and the film will be directed by Sukumar. The film is an action thriller which discusses the red sandalwood mafia in Chittoor district. Pushpa is carrying massive expectations and is the first pan Indian film of Allu Arjun.