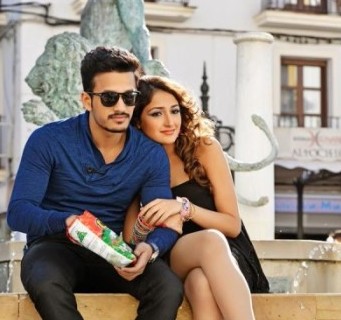 New stills from Akhil Akkineni’s launch movie in the direction of V.V.Vinayak were released today. Sayyesha Sehgal is paired with Akhil in this full length action entertainer. These stills were released on the occasion of her birthday. This untitled film is scheduled for release for Dusserah 2015. Title of the film and first look will be unveiled on August 29th for King Nagarjuna’s birthday. Thaman and Anoop Rubens are scoirng some high energy and soothing tunes for this most awaited film. Young hero Nithin is producing this film on Sresht Movies banner. Amol Rathod is cranking the camera.