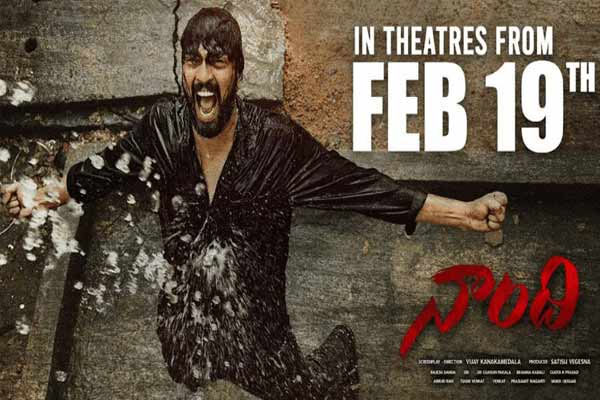 Actor Allari Naresh made unique attempts every now and then and he succeeded at times. The actor’s next offering Naandhi caught everyone’s attention after the release of the trailer. Harish Shankar’s protege Vijay Kanakamedala is making his debut as a director with this interesting film. Varalakshmi Sarath Kumar played a crucial role and Praveen, Priyadarshi will be seen in other important roles in this thriller. Satish Vegesna is the producer and Naandhi released across the globe today. Here is the review of Naandhi:

Naandhi is the story of Surya Prakash (Allari Naresh) who comes from a disciplined middle-class family. He loves his parents a lot and settles well in life. He is a software engineer by profession and when things are going extremely going well, he gets arrested in the murder case of social activist Raja Gopal. Despite his attempts, the court, the society believe that Surya Prakash committed the crime. Five years after the incident when Surya Prakash loses everything in life, he gets a surprise visit from Aadhya (Varalaxmi Sarathkumar). The rest of Naandhi is all about the investigation and the culprits behind the crime. Naandhi also narrates the depth of laws and the climax narrates how the title gets justified.

Naandhi is a good attempt that is hard-hitting. For every law point narrated on screen, the director managed to explain the logic behind it. Allari Naresh is a good actor and he delivered career best performance through Naandhi. After watching the film, one cannot expect anyone other than Allari Naresh to essay the role of Surya Prakash on screen. The first half of Naandhi is packed with all the ingredients. An emotional family track followed by a small love story and the film’s mood changes after the crime angle taking the lead.

Varalaxmi Sarathkumar carries the second half on her shoulders and takes the court scenes to the next level. All the court interrogation scenes are thought provocative. The director connected all the dots well and kept the audience amazed. The film takes a slight dip after the pre-climax court episodes. However ,the climax takes the film to the appreciable level. The best part of Naandhi is the major plot and the conflict point was never diverted and deviated because of the unwanted stuff. The director kept the film to the point though it happened on a serious note.

Allari Naresh is just wasting his talent by signing outdated comic entertainers. Naandhi is a perfect comeback for him as an actor and hope he comes up with such attempts to stay long in Telugu cinema. Varalaxmi Sarathkumar should be appreciated for the roles she is selecting. She is just flawless as Aadhya and is one of the highlights of the film. Devi Prasad as an emotional father did his part well. Praveen who was restricted to comic roles gets an interesting role that is tipped with emotions. His performance during the climax episodes is heart-touching. Harish Uttaman gets a powerful role in the film and he delivered his best.

Naandhi keeps audience emotional and guessing throughout. The montage songs equally elevate the film and all the emotional episodes are shot well. Apart from all these, the film also narrates the pain of thousands of innocent people who are left as trial accused in Indian prisons for years. Naandhi narrates about Section 211 which is never known for most of the country. The production values are good and the editing should have been better. Sricharan Pakala keeps up his good work once again and proves that he is an expert in composing the best scores for such interesting attempts.

The cinematography work is good. Coming to the debutant Vijay Kanakamedala, Naandhi hints at the amount of hard work he kept on the film. Right from the writing to the presentation and the direction, Vijay scores good marks on his debut. One should ignore the minor flaws when narrating a unique and serious attempt like Naandhi. On the whole, Naandhi is a comeback for Allari Naresh as an actor.

Naandhi is an honest attempt that does justice for the title. Allari Naresh, Varalaxmi Sarathkumar are  brilliant in their roles . This appreciable attempt may need commercial support from audience which is doubtful due to the serious tone of the film.