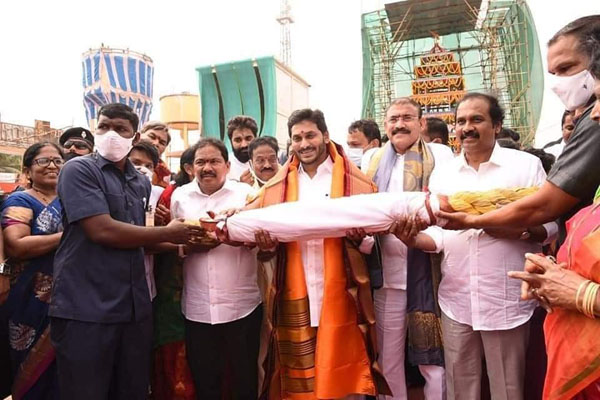 In a record three months time, the new chariot of Antarvedi Temple was made ready. AP Chief Minister YS Jaganmohan Reddy visited Antarvedi and inaugurated the chariot today. Over Rs. 1 cr was spent to carve the new 40-ft high chariot for which 1,330 sq ft of bastar teak was used.

The CM has also pulled the chariot along with the devotees in its inaugural roll out. The Vedic pandits showered blessings on Mr. Jagan Reddy at the Raja Gopuram on the temple premises. He also had the darshan at the Sri Lakshminarasimha Swamy Temple.

The old chariot of Antarvedi Temple was burnt by miscreants on September 5 last year. The chariot torching created a sensation with the Opposition parties demanding a thorough investigation. The agitators took up Chalo Antarvedi protests as well. The AP Police could not achieve any breakthrough because of the failure of CCTV cameras that were placed at the chariot shed.

As a result, the CBI investigation was ordered into the torching incident. Ever since there has been no information about the status of the investigation. During his current visit, the CM just came and went but did not say a single word after inaugurating the chariot.