While the government had notified 29 villages of Thulluru, Tadepalli and Mangalagiri mandals for the capital – Amaravati – and took up the land pooling system to collect the lands from farmers, the villages under Tadepalli and Mangalagiri have been resisting the pooling system. They have put up banners in Undavalli and Penumaka villages of Tadepalli mandal, Yerrupalem and Bethapudi of Mangalagiri mandal refusing to give their lands. Several of them have approached the courts against land pooling, while some of them have not given the required papers accepting the land pooling system. It was in these villages, Opposition leader Y S Jaganmohan Reddy and Jana Sena chief Pawan Kalyan have toured in 2016 in support of the farmers. While Jaganmohan Reddy had promised to return their lands if they wanted once he came to power, Pawan Kalyan advised the government not to use force to take the lands. He had even asked the government not to issue land acquisition notification. Now that the government had issued the notification, the farmers are looking towards Pawan Kalyan to save their lands.

“Pawan Kalyan had promised to stand by us and he had promised to fight for us if the government issued land acquisition notification. Now, the government had issued the notification. We have sent a representation to the Jana Sena chief and waiting for him to react,” said Penumaka farmers’ leader Naresh Reddy. A team of farmers have also approached Pawan Kalyan seeking his intervention to save their lands.

The government can’t move even a inch forward in developing the new capital, Amaravati, if it failed to take lands in Undavalli and Penumaka, the mouth of the capital. It is by passing through these villages, one can reach Amaravati and it required lands to lay roads and bridges. The proposed six-lane Seed Access Road from Kanakadurga Varadhi (Chennai-Kolkata national highway) to Thulluru would require lands in Undavalli and Penumaka which are not given yet to the government. If these lands are not taken, the government cannot lay the road from Vijayawada to reach the new capital zone. The government would have to take a new route from Mangalagiri to the core capital area passing through Kuragallu, Neerukonda and Inavolu. The existing flood bank passing along the river from Prakasam Barrage is another option for the government if it cannot get the lands of Undavalli and Penumaka villages. The flood bank (karakatta) can be expanded and used as access road to the capital from Vijayawada through Prakasam Barrage. However, as Prakasam Barrage requires to be closed once in a year for maintenance of the gates, the government would have to use an alternative and permanent road from Kanakadurga Varadhi. This too has a big problem as the farmers of Tadepalli through which the road has to be formed, are opposed to the land acquisition. Caught in a critical situation like this, the government had issued the notification to acquire 680 acres of land in Penumaka village.

Farmers’ leader Naresh Reddy expressed confidence that Pawan Kalyan would come to their rescue and save them from the forcible acquisition of their lands. It is to be seen how Pawan Kalyan would react to the request from the farmers to whom he had promised to stand by. 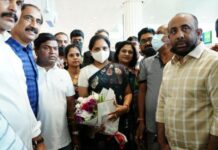