The High Court issued notices to Bapatla YSRCP MP Nandigam Suresh for his recent controversial remarks against the court. At a press briefing, the Bapatla MP attributed motives to the court stating that TDP president and former chief minister Chandrababu Naidu was managing even courts. “Chandrababu Naidu seems to know the High Court verdict 10 minutes in advance. Chandrababu’s call list should be examined to verify if he is involved in the judgement process.” These are not just highly objectionable remarks, but amount to contempt of court.

The High Court also served notice on former Chirala MLA Amanchi Krishna Mohan for making remarks that are contempt in nature. While Nadigam Suresh had cast aspersions on the courts with his “Naidu managing courts” remarks, YSRCP leader and former Chirala MLA Amanchi Krishna Mohan found fault with the High Court directive to the CBI to probe the police highhandedness against Dr Sudhakar Rao.

The civil surgeon of Narsipatnam government hospital was suspended for raising his voice against shortage of medical equipement like masks, gloves and PPEs. On the pretext of drunk driving, the police dragged him on the streets, his shirt removed, his both hands tied with a rope while a constable repeatedly delivered blows with his lathi. The videos of the same went viral.

Taking suo motu cognizance of the way Dr Sudhakar Rao was harassed, the High Court had directed the CBI to thoroughly probe the incident. Reacting to this, Amanchi Krishna Mohan said it was petty case, one that does not warrant a CBI investigation. “It’s a petty case. For every petty case, a CBI investigation should not be ordered. The High Court ordering CBI probe has surprised everyone in the state,” he said. He didn’t stop there. Fuming at the HC directive, the YSRCP leader further said people will lose faith in the courts with such directives. “It is not correct to comment on court verdicts, but it is not correct on the part of the court to order a CBI probe,” he commented. The YSRCP leader said that he would have launched an agitation against the court directive but for the lockdown. “If every petty is handed over to the CBI, then the central government should set up a CBI office attached to all the police stations in the state,” he said.

Earlier, reacting to Nandigam Suresh comments against the High Court, TDP politburo member Varla Ramaiah had recently appealed to the AP High Court to take suo motu notice and initiate contempt proceedings against him for making such disparaging remarks against the judiciary. He also demanded that Nandigam Suresh’s Lok Sabha membership be suspended.

In the past, the High Court had also initiated contempt of court proceedings against Andhra Pradesh Chief Secretary, DGP Gautam Sawang and other top officials for violating the court’s directive to remove YSRCP party colours on government buildings and panchayat offices. 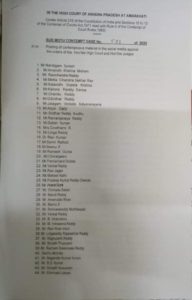 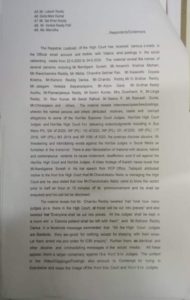