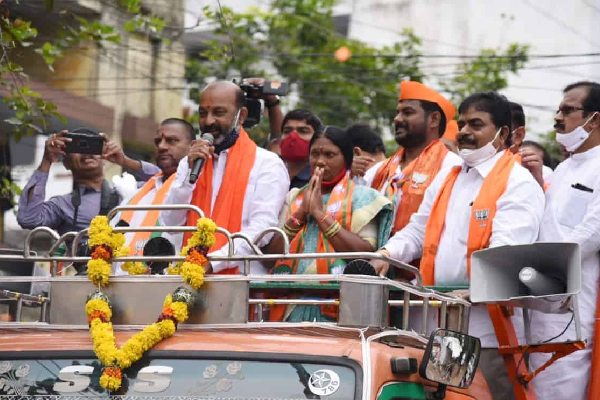 A successful padayatra, a fire-spitting leader and extensive support from the higher-ups. Yet, there is a speck of doubt and disbelief in the Telangana BJP over the Praja Sangrama Yatra that it is conducting right now. The party is worried about whether it would be able to continue the tempo till the end. The party is apprehensive whether the enthusiasm seen in the urban areas will be matched by interest in the rural areas.

The Telangana BJP is enthused by the fact that the response to the launch of the yatra was beyond expectation. The turnout was impressive. But this is now the cause of worry for the party. Will the party be able to sustain the same interest till the end – is the question troubling the party. The yatra is now entering into the rural interiors. The party has fixed targets for crowd mobilisation. Special committees have been formed to ensure the turnout and details of how far the crowds will travel, what kind of cultural bands should accompany the yatra are being worked. Till now, the response has been good as it is in and around Hyderabad, where the party has considerable influence.

Now the yatra is entering into the rural areas and the party is worried if the yatra would get the same kind of response in the interior areas too. If it fails to draw the crowds, then the TRS and the Congress will ridicule the yatra and say that the BJP is the party of the cities. The party would have to do a lot of explaining if the yatra failed to enthuse the people in the rural areas.

Hence the party is now said to be planning mobilisation from the centres of its influence to the rural areas to ensure a good turnout. The units in the main cities have reportedly been asked to mobilise crowds for nearby rural areas so that the yatra does not appear to be an insipid affair. Incharges have been appointed for different rural centres to ensure a decent turnout.