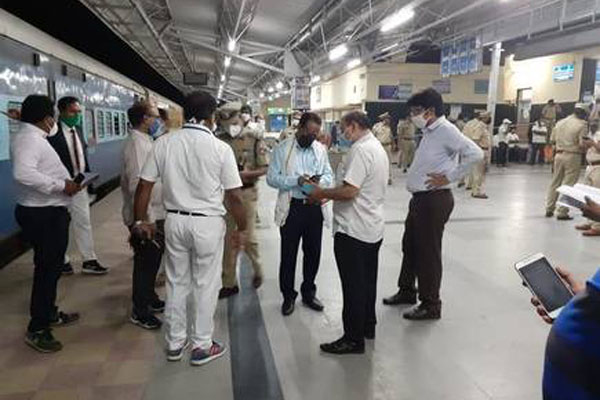 As the first Shramik train chugged out of Lingampally Station on the outskirts of Hyderabad around 4.50 a.m. on Friday, there was a big smile on the face of its 1,225 passengers.

Their 40-day ordeal was coming to an end and they were finally heading home. This moment will always be cherished by the migrant workers from Jharkhand who boarded the first special train operated to transport stranded workers anywhere in the country since the lockdown began in March to check the spread of coronavirus.

It was a pleasant surprise for the workers and it came as a Labour Day gift for them. Only a few hours ago they had no idea that they will be heading to their destination.

The Telangana government and railways carried the entire operation with such secrecy that barring a few top officials, no one had any information about the train.

It was around 10.30 p.m. Thursday that Sangareddy Collector Hanumantha Rao and Superintendent of Police Chandrashekhar Reddy reached Indian Institute of Technology (IIT), Hyderabad campus at Kandi. They went to the camp where migrant workers hired for construction of IIT buildings were living since the lockdown began in March.

It was only two days ago that 2,464 workers at IIT campus had staged a violent protest demanding wages and the arrangements to send them back to their homes.

The district officials had made the construction company pay their wages on April 30. When the collector and SP reached the camp on Thursday night, everyone thought they came for further talks with them.

Instead, the officials segregated the workers from Jharkhand. They were made to sit in an open place with face masks tied and the health personnel screened their body temperature.

In the meantime, 56 buses of Telangana State Road Transport Corporation (TSRTC) reached the campus. The state-owned transport corporation had arranged the buses at a very short notice.

It was then the workers sensed that they were being sent home. Carrying their luggage, they boarded the buses around midnight. They thought they were heading home by road.

However, after travelling for about 30 km, the buses stopped at Lingampally Railway Station. The workers were asked to get down and enter the station in a disciplined manner while maintaining the social distance.

“The entire operation was a closely guarded secret to avoid any gathering or chaos at the railway station seen at few places in the country recently,” said an official involved in the operation.

The special train comprised 22 bogies – 18 sleeper coaches and four general. Every 3-tier sleeper coach will normally have 72 berths. However, to ensure social distancing the railways removed the middle berths. Thus 54 people were accommodated in each sleeper coach.

The officials gave tickets, water bottles and food packets to the workers. They were also provided masks, sanitisers and gloves.

AAs the train chugged out of the station, the officials and other personnel clapped to give a warm send-off to the migrant workers, who were relieved that their agony was finally coming to an end. They were served another meal enroute and after an 18-hour non-stop journey the train reached Hatia at 11.15 p.m.

On April 29, when the Centre decided to allow stranded migrant workers, students and tourists to return home, the state government had appointed Sandeep Kumar Sultania as the nodal officer for to and from movement of stranded persons. Jitender was named police nodal officer.

“This shows our concern and commitment for their welfare. We don’t call them migrant labourers. We consider them as partners in the development of Telangana,a said Health Minister E. Rajender.