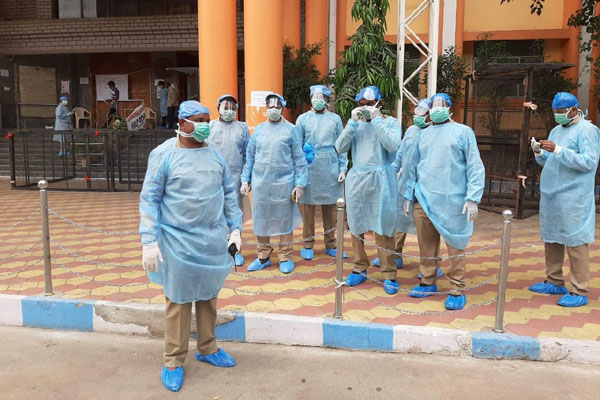 Andhra Pradesh now stands fourth state in India that has seen the highest spike in corona cases among top ten states, according to John Hopkins Covid Tracker. Maharashtra, West Bengal and Gujarat are the top three states that reported highest number of cases. Among 22 states and 9 UTs, AP now stands in the 8th position with highest number of covid-19 cases.

In the week so far, Andhra Pradesh seems to have failed to bend the coronavirus curve despite an extended period of lockdown and social distancing. The evidence this week is stronger. Continuing an upward trend for the sixth straight day, Andhra Pradesh reported 62 new cases of the Covid-19 in the last 24 hours with the state’s tally crossing the 1,500 mark. The death count remained at 33.

The number of confirmed cases in the state grew at a faster rate than most other states in the week so far. Andhra Pradesh has been in the spotlight as it struggles to deal with a wave of infections at a time the country is witnessing a downward trend in the number of Covid-19 cases. Covid-19 numbers show a sharp upward trend with at least 400 new cases reported in the week so far. While Telangana showed a steady decline in the number of coronavirus cases in single digits in the last one week, AP’s corona figures seem to be in acceleration phase. The state has been reporting double digit rise in coronavirus infections in the the week so far as the state prepares for a gradual easing of its lockdown.

On Saturday, in Andhra Pradesh, 25 fresh cases were registered in Kurnool, 2 cases in Guntur, 18 fresh cases in Krishna taking the tally to 1,525. Kurnool continues to have highest number of cases at 436, followed by Guntur and Krishna with 308 and 258 cases respectively. Kurnool also reported the maximum number of deaths at 10, followed by Guntur and Krishna registering eight deaths each, four deaths were reported in Anantapur and three in Nellore. Over the weeks, Kurnool turned into an epicentre for the virus.

In the district, YSRCP MP Dr Sanjeev Kumar recently admitted that six members of his family members tested positive for Covid-19. He also stated that Corona spread is in fourth phase in Kurnool and it is spreading fast in the district. As the number of corona cases go unabated in Kurnool, the state government sacked municipal commissioner Ravindra Babu and appointed IAS officer D K Balaji in his place which was crticised by the opposition saying sacking or removing officials will not solve the problem at hand.

Meanwhile, the state government announced that there will be considerable lockdown relaxations in many districts in the state from May 3. Experts fear that if the complete lockdown is lifted there could be a second wave of infections in the state. They fear community transmission will take place as people move around and it will be difficult to contain the virus.

The central government on Friday released fresh list of containment zones and divided the states and districts into different categories according to the coronavirus situation in these areas. AP has only one green zone i.e Viziangaram. Srikakulam lost its corona-free status after it reported more than six positive cases of corona and accordingly the central government has moved the district from green to orange zone. The red zones in Andhra Pradesh include Kurnool, Guntur, Krishna, Nellore and Chittoor; East Godavari, West Godavari, Kadapa, Anantapur, Srikakulam, Prakasam, Visakha were demarcated as Orange zones. Vizianagaram is the lone district that was categorised as green zone by the central government.