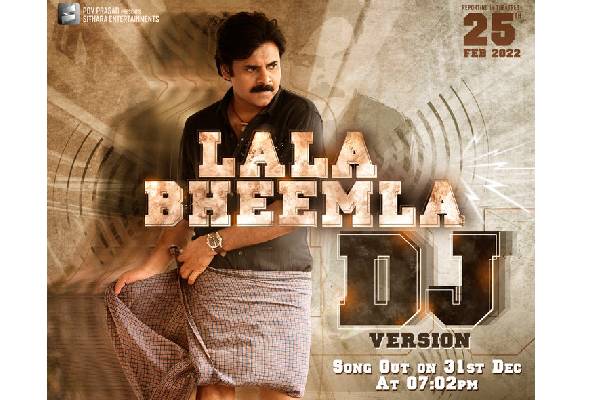 The title song ‘La La Bheema’ from Pawan Kalyan’s upcoming movie Bheemla Nayak is a sensational hit and is on the top of the music charts. The makers announced that the DJ version of the song will be out on New Year’s eve on December 31st at 7:02 PM. The entire shoot of Bheemla Nayak is wrapped up completely and the film is announced for February 25th 2022 release. Pawan Kalyan plays a ruthless cop in the film and Rana Daggubati will be playing the other lead role.

Sithara Entertainments are the producers and Thaman is the music director. Saagar Chandra directed Bheemla Nayak and Trivikram handled the script of the film. Bheemla Nayak is carrying terrific expectations and Nithya Menen will be seen playing Pawan Kalyan’s wife. Pawan Kalyan is currently in Russia and is spending time with his family members.