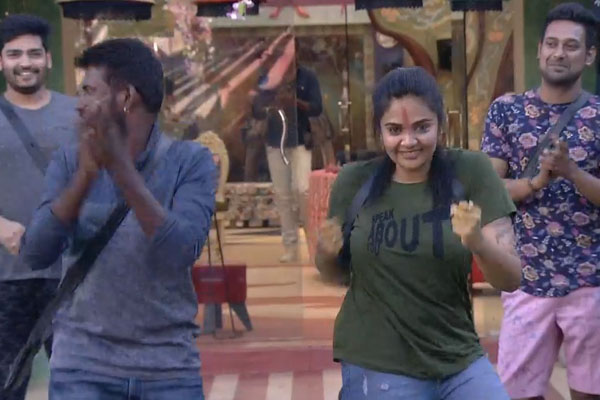 Sreemukhi becomes captain of Bigg boss house for this week for the first time. She won in captaincy task contended by Baba Bhaskar, Shiva Jyothy and Ravi.

As per the captaincy task, Bigg boss gave the contenders bowls of color liquid. Each of them has to save the liquid in their bowl. They cant keep the bowl down or give the bowl to others or even hold it with single hand. If they do so, they will be out of the task. In the end, whoever has the bowl with more liquid, will be the winner. Housemates can save their favorite contestant’s bowl and try to spill the liquid from other contenders.

As Baba Bhaskar and Shivjyothy have already become captains in previous weeks, housemates didn’t support them. Housemates were divided between Ravi and Sreemukhi though, in their support. Ali Reza told, he wants to support Ravi as he is in nominations this week and may get evicted and so he will leave the house with a satisfaction of serving as captain. Varun also supported Ravi. However, Sreemukhi’s arch rival in the house Rahul also supported Sreemukhi. Varun’s wife Vitika supported Sreemukhi despite Varun supporting Ravi. Ali took bowl from Baba Bhaskar and as per rules, Baba was out of the game for giving away his bowl. Later Bigg boss announced that Shiva jyothy also out of the task as she held the bowl with single hand. However the task turned interesting after this as it was direct competition between Sreemukhi and Ravi and both of them have never become captain in the house and both of them are in nominations this week. As per rules of the task, contestants can re-fill the bowl once and Ravi utilized the opportunity and refilled it with help of Varun. Sreemukhi didn’t refill. her bowl.

At this stage, Ravi did a blunder. Even though his bowl had more liquid and if he sustained he would have become captain. But he moved towards Sreemukhi and tried to spill the liquid from Sreemukhi’s bowl with his leg. Meanwhile Vitika tried to save Sreemukhi by pushing Ravi’s bowl and all the liquid from his bowl spilled and he was out of the game.

After becoming captain, Sreemukhi took sweet revenge on Baba by forcing him to do mean tasks as he did the same to her when he was the captain. We have to wait and see who will get evicted from house this weekend.