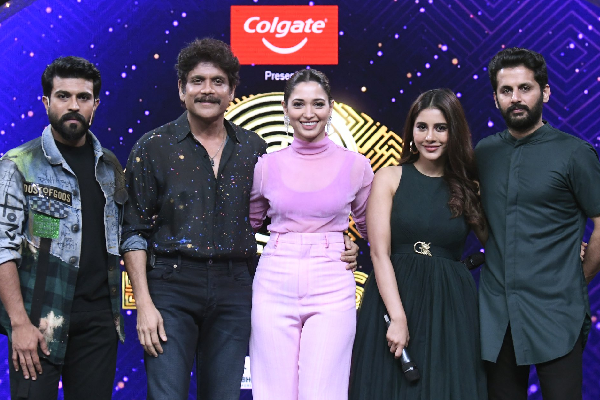 Today’s episode started with Bigg boss announcing Sunny’s release from Jail. Lobo and Uma were seen flirting with each other, though it looked fake. Ram Charan and Maestro team joined the house today and made the episode wonderful.

Ram Charan recently became brand ambassador for Disney + Hotstar. Bigg boss makers telecast the ad in which Ram Charan performed as show man and revealed that the ad was immensely liked by the kids. Ram Charan also revealed in the show that Sai Dharam Tej is recovering really fast. Ram Charan also announced that Bigg boss show is number one show not only in Telugu but in India. Nagarjuna told Bigg boss Telugu made Star MAA number one regional channel in the country

As soon as housemates saw Ram Charan, they went crazy and shouted a lot. They looked so happy knowing Ram Charan is the brand ambassador for Hotstar. Charan interacted with each and every housemate. He recalled Anne doing choreography for Sangeet programs during his sister’s marriage . He poked fun at Ravi and told him not to tease his co-anchors. Priyanka told he has been asking Nagababu and Niharika for a photograph with Ram Charan for so long. Ram Charan spoke spontaneously with Priya. He appreciated Lobo. Shanmukh told he is a very big fan of RCT. Sriram sang Bangaru kodipetta song. Hamida told she had tried to take a photograph with RCT long back but was not successful. Manas told he is also from the same school as Ram Charan and he used to hear lot of stories about him and Rana in the school.

Maestro team in the house:

Ram Charan hosted Maestro team on to the stage. His Camaraderie with Nitin and Tamanna was too good. The way he hosted them proved that he has the ability to handle TV shows too. Nagarjuna appreciated hosting skills of Ram Charan.

Nagarjuna asked all the housemates to question themselves and whoever believes they have done something wrong has to stand up. Then Nagarjuna reprimanded Uma for using foul language. He has also exposed double standards of Swetha who spoke on humanity. He asked Lobo to quit smoking.

Siri alleged on Sunny and told he inappropriately touched her during a task. Audience clearly know that he did not do anything wrong but Siri dragged the discussion and tried to assassin the character of Sunny. In today’s episode, Nagarjuna showed the video and exposed her fake allegations. However Siri cleverly covered herself by saying , during the task it was not clear whether Sunny really put her hand inside her T shirt or not but she thought so.

Anne and Lobo saved from elimination:

In Bigg boss house, Uma, Nataraj, Kajal, Lobo, Annie, Priyanka, Priya were nominated for the elimination this week. As of now, Anne master, Nataraj master and Uma are the bottom 3 even though the order is not clear. Today Anne, Lobo and Priyanka were saved from the elimination. With this, Nataraj master, Uma, Priya and Kajal are still in danger zone

Nagarjuna also made the housemates happy by revealing that the launch episode got 18 points TRP, which is one of the highest in Telugu television history. Overall it was a wonderful episode of Bigg boss this weekend.