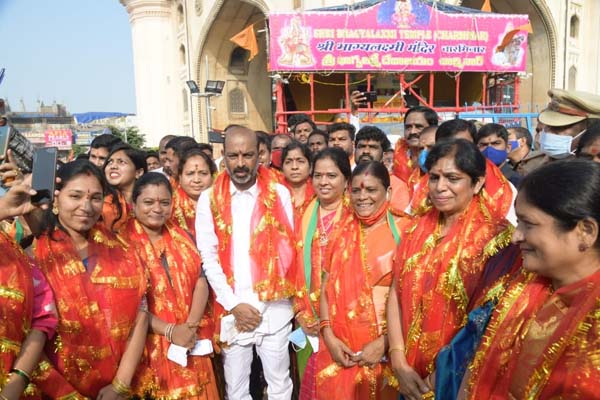 Party’s Telangana unit president Bandi Sanjay Kumar administered oath to 48 corporators. They took a pledge to stay away from corruption, serve the people and abide by the party principles.

Temple committee welcomed Sanjay Kumar, MLA Raja Singh and corporators, and felicitated them. They all had “darshan” before taking the pledge.

Putting up an impressive performance in the elections held on December 1, the BJP won 48 seats in 150-member Greater Hyderabad Municipal Corporation (GHMC).

Speaking on the occasion, Sanjay said the BJP may not have its candidate as mayor but its corporators will work for the development of the city.

He slammed the TRS government for delaying the mayor’s election. He said the government conducted the GHMC polls in haste before the end of the municipal body’s term but it is now delaying election to the post of mayor.

Sanjay, who is an MP from Karimnagar, reiterated that the TRS was insulting people of the majority community to please a particular section. He said the BJP was trying to liberate Hyderabad from Majlis-e-Ittehadul Muslimeen (MIM). He said the people should ponder why there was no development in the old city.

Stating that the BJP achieved the victory in the GHMC polls because of the blessings of Bhagyalakshmi, Sanjay said he would again visit the old city.

Police had made tight security arrangements on the occasion to prevent any untoward incident.

The controversial temple, which saw expansion in recent years, was the focal point of the BJP’s GHMC poll campaign.

Union Home Minister Amit Shah had also visited the temple on November 28 to begin his day-long campaign for the BJP.

The communally sensitive old city in the past witnessed tension and clashes over the temple. The Archaeological Survey of India (ASI) on several occasions has asked for removing the illegal structure which came up in the 1960s. The Hindu groups have claimed that the temple is as old as Charminar, which was built in 1591.