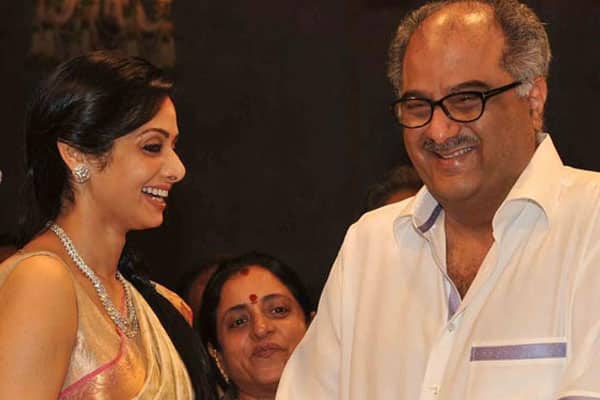 Film trade analyst Komal Nahta has claimed that Bollywood diva Sridevi’s filmmaker husband Boney Kapoor has opened up to him about his final meeting with his wife, a surprise that turned into a tragedy.

Sridevi, 54, passed away on February 24 in her Dubai hotel room due to accidental drowning following loss of consciousness.

Mr Nahta in his blog said Boney Kapoor wanted to surprise Sridevi who had decided to spend a couple of days in Dubai to shop for daughter Janhvi after the wedding of nephew, actor Mohit Marwah, in Ras Al-Khaimah on February 20.

He said the 62-year-old producer had a meeting to attend in Lucknow on February 22, which he did. On the same day Sridevi, spent time with her friend, chatting and relaxing in her hotel room.

“On 24th morning, I spoke to her,” Mr Nahta quoted Boney Kapoor as telling him.

The producer said Sridevi had told him, “Papa (that’s how Sridevi addressed Boney), I’m missing you.”

Boney Kapoor, however, didn’t tell her that he would be joining her in Dubai in the evening.

“Boney recounted that there had been only two occasions in the last 24 years when they had not travelled together abroad when Sridevi had travelled alone on two brief foreign trips one to New Jersey and the other to Vancouver for two appearances…,” Mr Nahta wrote.

Mr Nahta said, “Boney opened the door of Sridevi’s room with his duplicate key. ‘But she told me, she had a hunch that I would come to Dubai to fetch her,’ Boney recalled. The couple hugged, kissed and chatted for almost half an hour.”

According to Mr Nahta, Boney Kapoor suggested, the two go for a romantic dinner and requested Sridevi to postpone the shopping to the following day.

The actor, 54, then decided to go for a bath and get ready for the dinner.

“I went to the living room while Sridevi went to the master bathroom to bathe and get ready,” Nahta quoted Boney as telling him.

The trade analyst said Boney Kapoor watched TV for around 15-20 minutes but started getting restless “because he was aware that being a Saturday, there would be a rush in the restaurants. It was around 8 p.m. then.”

“He made shout out to Sridevi from the living room but when he did not get any response he knocked at the bathroom door and even called out to her”.

“The unsuspecting husband, hearing the tap inside on, then called out ‘Jaan, Jaan’ still louder but got no reply, which was unusual. He panicked and opened the door which had not been bolted from inside, nervous but yet not at all prepared for what he was going to see. The tub was full of water and Sridevi was immersed completely, from head to toe, inside the tub. Devastated, he reached out to her but watching her motionless, he feared the worst,” Mr Nahta added.

“… The mystery will remain unsolved. But that was not of much relevance to her near and dear ones. What mattered the most was this: Sridevi, the vivacious, beautiful and talented heartthrob of millions, had become late Sridevi,” he concluded.