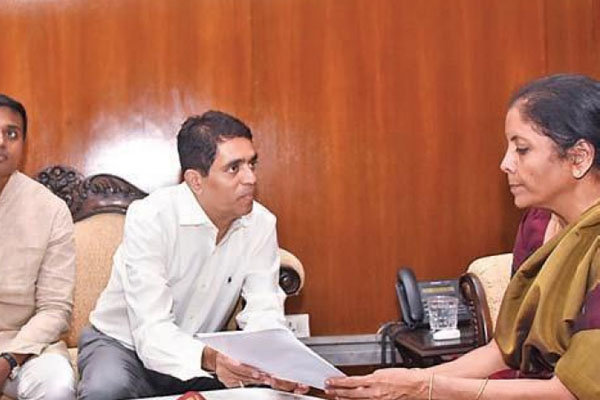 Andhra Pradesh finance minister Buggana Rajendranath met Union Finance Minister Nirmala Sitharaman in New Delhi and requested ‘urgent reimbursement’ of the expenditure made by the State for the Polavaram project, the heart and lifeline of Andhra Pradesh.

Highlighting the need for quicker disbursal of funds, Buggana Rajendranath noted that the State government had borrowed Rs 5,103 crore and spent it on the construction of Polavaram irrigation project. The state finance minister said the YSRCP government was expecting cooperation from Nabard in its effort to drive the state on a development path. On her part, Union Finance Minister Nirmala Sitharaman informed Buggana Rajendranath that the funds were getting delayed from Nabard to the central government and from central government to the Polavaram Project Authority.

After consultations with Nirmala Sitharaman, Buggana Rajendranath also met finance secretary S S Rawat and Union Jal Shakti Minister Gajendra Singh Shekhawat and informed them that the YSRCP government had spent Rs 5,000 cr on Polavaram project so far and was paying Rs 500 crore as interest on it. The state finance minister requested reimbursement of Rs 3,000 cr on war-footing for the speedy construction of Polavaram project.

In 2019, replying to a question in Rajya Sabha, Union Jal Shakti Minister Gajendra Singh Shekhawat had asked the YSRCP government to a ‘proactive’ manner in completing Polavaram project and that the funds for the national project would be released only when the State submits the audit reports of the expenditure made prior to April 1, 2014. The State government had submitted audit reports only for Rs 3,000 crore of the Rs 5,130 crore spent on the project and added that approval for the revised cost estimates (RCE) could be given only after the reports for the remaining amount are furnished. The state government has to furnish audit reports for Rs 2,000 crore. Gajendra Singh Shekhawat told Rajya Sabha that until these reports are submitted, it will not be possible to finalise the cost necessary for the revised detailed project report’s approval.