Megastar Chiranjeevi has been busy with the movie Sye Raa Narasimha Reddy and just started promoting the movie. As part of this promotion, he gave an interview to leading Telugu news paper and responded on several topics.

When he was asked to respond on the debacle of janasena party in recent elections, Chiranjeevi told that, political journey is a long one and this kind of failures are bound to come. Expressing confidence on Pawan Kalyan, he told that, Pawan has the ability to steer the party into victory. Also, Chiranjeevi was asked to respond on the rumour that one of the national party ( BJP) trying to rope him into their party. Interestingly Chiranjeevi did not condemn these rumours. He just told that it is their wish that I join their party but as of now I am fully focused on movies only.

So, it’s clear that Chiranjeevi got proposal from BJP but he gently rejected their proposal. 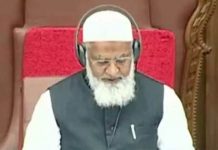