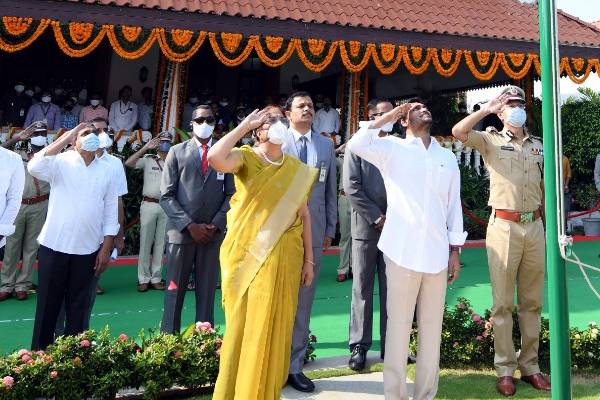 The tragedy of Andhra Pradesh is more tragic than that of endless troubles of an ill-fated middle class family in a Telugu film. This is what will sum up the AP Formation Day speech made by Chief Minister YS Jaganmohan Reddy to the people of the State after unfurling the national Tricolour. He openly said that the AP people suffered heavily because of betrayal by both outsiders and insiders.

While the outsiders inflicted irrecoverable knife injuries, the insiders resorted to backstabbing against their own northerly State. As a result, AP has met with injustice and great losses. Going a step further, Mr. Jagan Reddy said that the strongly rooted casteist forces were bringing more harm to the State these days. With these feelings, some persons were undermining the systems and institutions causing irreparable damage.

CM Jagan further said that his Government has unveiled a noble agenda for bringing change for better in the State. Good government was being provided. A corruption-free and discrimination-free administration was being ensured to help all sections of society.

Mr. Jagan Reddy asserted that with the blessings of the God and with the unquestioned support of the people, his regime was moving forward.