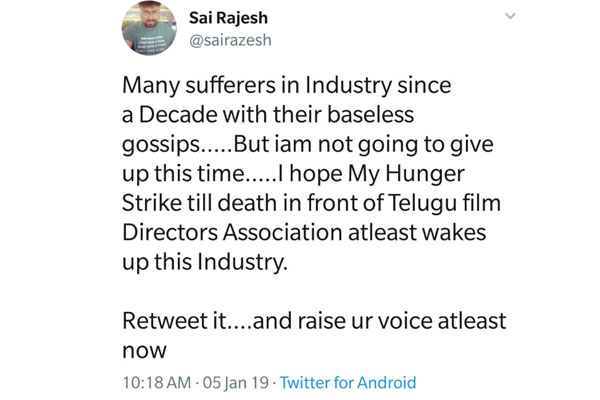 Recently, an article with the title ‘ Comedy Director who duped NRIs’ appeared in one of the Telugu web portals which has a reputation for publishing derogatory gossips about industry people. The article alleged that a comedy director who has directed one film has duped NRIs for one crore and also misappropriated 20 lakhs from a young heroine. The defaming article received many comments referring at Hrudhaya Kaleyam director Sai Rajesh.

Condemning the false news, Sai Rajesh sent legal notice to the website and its head demanding immediate removal of it and to tender an unconditional apology. He has also sued them to pay 2 Crores for deliberately tarnishing his image and causing irreparable loss. He has also sent notices to people who are targeting him in social media via Twitter and other sites. He has decided to launch a hunger strike in front of the Telugu film directors association to take action against the website for spreading malice on industry people.

Sai Rajesh’s second film Kobbari Matta was due for release and the teaser was released recently. Sampoornesh Babu played the lead role.