After two years in the political wilderness, the Congress in Telangana is slowly getting its act and roadmap together. It has decided that the route to the seat of power in Hyderabad will be through Medak. Which explains its single-minded focus on chief minister K Chandrasekhar Rao’s home district. And if all goes well, even Rahul Gandhi may visit Medak soon to be part of the agitation.

The opposition party called a Medak bandh on Monday to protest against the police lathicharge and firing in the air to disperse angry farmers on Sunday. The farmers were trying to block the Hyderabad-Karimnagar highway in the Dubbaka assembly constituency. 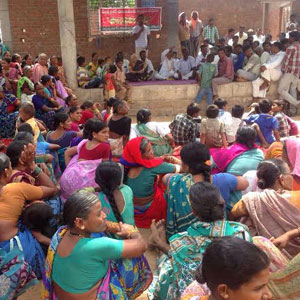 At the core of the Medak focus is the farmer-driven agitation over the Mallanna Sagar project in the district that has lasted two months. Admirable in a state, where the opposition is in ICU and the ruling Telangana Rashtra Samiti has occupied most of the space in the political spectrum by wooing most of the non-TRS MLAs and MPs into its fold.

But the 30,000 villagers in 14 villages do not want to part with their multi-crop land. The Congress is backing the agitation completely now, with most of its senior leaders making their presence felt. Since Harish Rao, KCR’s nephew and Telangana’s irrigation minister is driving the project, it has given the agitation by the Congress, an added political dimension.

The Congress does not want to lose the momentum it is gaining in Mallanna Sagar. All constituency incharges were asked to be on the road on Monday to ensure that the bandh was a success, in an attempt to embarrass KCR and drive a wedge between the CM and his nephew. Specific leaders have been asked to reach out to the youth to co-opt them in their anti-TRS missive. Youth Congress leaders have been asked to speak on the subject in colleges so that this does not remain confined only to the 14 villages but becomes a pan-Medak and pan-Telangana issue.

On Tuesday, the Congress has called for a `Chalo Mallanna Sagar’ in which 100 to 150 cars will set off from Gandhi Bhavan in Hyderabad to Mallanna Sagar dam site, a distance of approximately 60 km. The intention is to spread the message in rural Telangana that a Mallanna Sagar can happen anywhere, given the government’s thirst for land for projects.

There is Congress party’s internal politics at play as well. With indications that the present PCC chief Uttam Kumar Reddy may be shown the door, Mallannasagar has emerged as an opportunity for others to showcase their leadership mettle. Among the aspirants is former deputy chief minister in united Andhra Pradesh, Damodar Rajanarasimha who is also playing the Dalit card to emerge as a front-runner.

Mallannasagar project has dented KCR’s image as someone who projects himself as a son of the soil. But the Congress sees it as the magic potion that may just bring it back from the dead.