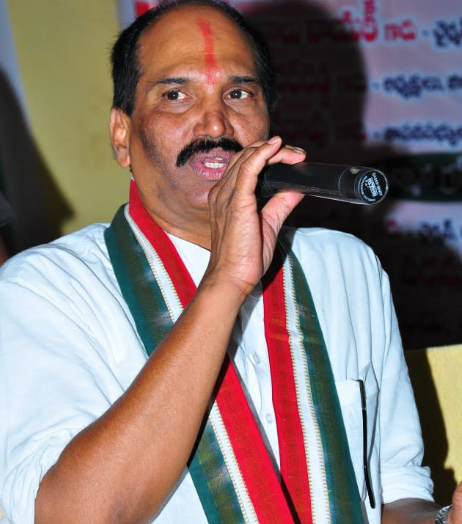 The Telangana unit of grand old party of India grabbed the opportunity thrown up the strike of the municipal sanitary workers to prove that it is not in slumber but alive and kicking.

This is said to be the result of the Rahul effect on the party. All these leaders, two days ago met party vice president Rahul Gandhi and discussed the strategy to strengthen the party in the region to make it fit to face the 2019 election. Rahul is said to have asked them to prove their mettle or step down.

Today, every leader in dharna, defying their age and position, sat on the road and chanted slogans. The administrative district of  Hyderabad, ie Secretaiat, reverberated with the slogans “KCR down down” and ” Down with KCR’s dictatorship” and  “Justice to municipal workers”.

There has been criticism against Jana Reddy that he was not upto mark in  berating the ruling party in the Assembly. There was even talk that Jana, who is above 70, should be replaced by a relatively younger leader in sync with times. Similarly, there has been talk about leaders such as Danam Nagener that they are planning to switch sides. The new generation leaders such as Uttam and Mallu are being seen as inexperienced. In today’s dharna these leaders displayed their skills of street-smart politics to deny the charges against them.

Jana Reddy and VH wanted to convey that they were not weighed down by the age and still could lead the party.The younger generation jostled to demonstrate that they had come of age and ready to take on mighty KCR.

V Hanumantha Rao said it was inhuman on the part of chief minister KCR to ignore the people who were responsible for the well being of our cities and towns. ” If you want Swachh Hyderaa or Telangana, it is incumbent upon you take the municipal workers on board by increasing their wages,” he said.

PCC president Uttam is of the opinion that KCR was becoming undemocratic and was growing intolerant of legitimate demands agitations.

After the dharna, the leaders have taken in custody by the police and were shifted to Nampally and Gandhi Nagar police stations.