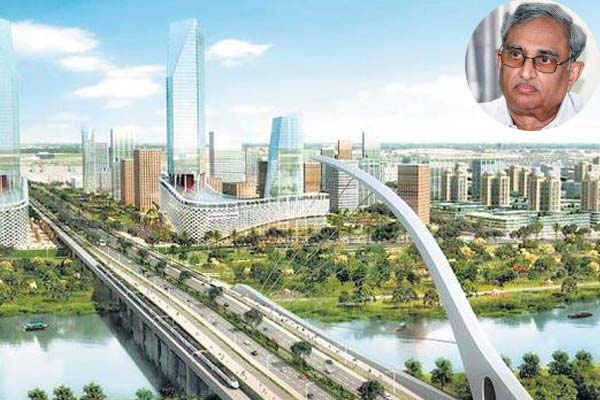 Amid the intriguing silence, former union secretary and noted environmentalist Dr EAS Sarma raised some objections and sent to the CRDA. Sarma raised objection to the very location of the site chosen for the construction of Amaravati Capital city. Following are his objections dispatched to the CRDA on Friday Morning.

* The Master Plan is inconsistent with the intent and the spirit of Section 6 of the AP Reorganisation Act. The objections against the Master Plan arise primarily from this.

* The site chosen for the capital city is not in line with the Terms of Reference (TOR) stipulated by the Union Home Secretary vide his DO letter No. 12012/03/2014-SR dated 28-3-2014 for the Sivaramakrishnan Committee appointed in pursuance of Section 6 of the AP Reorganisation Act. The TOR required the Committee to keep in view the need to cause “the least possible dislocation to existing agriculture systems as well as ensure minimum resettlement of people and their habitations”, to ensure “preservation of local ecology and natural features including water bodies”, make a “vulnerability assessment for natural disasters like floods, cyclones and earthquakes” and “assess the scope for minimising the cost of construction and acquisition of land”. The least that APCRDA could have done is to keep in view these considerations. The Master Plan ignores these aspects altogether.

* While the Master Plan does refer to the fact that the Amaravati site is heavily flood prone, it fails to analyse the historical data on the intensity of the floods and provide risk mitigation measures including the need to raise the level of the building foundations and their feasibility consistent with the financial capability of APCRDA. If this aspect were to be considered, it would have woken up the APCRDA authorities to the harsh reality that the site chosen is clearly infeasible.

* The Master Plan is evidently a hurriedly prepared document not based on any scientific evaluation of the topography of the region and the geological features. For example, the region where the capital city is being contemplated has low lying lands, wetlands, paleochannels etc. where any construction activity is bound to lead to a situation that was faced recently in Chennai in the event of a heavy spell of monsoon rains. Chennai city carried the sins committed by the urban planners in the past. Amaravati could easily avoid a repetition of it!

The Central Ground Water Board (CGWB) has delineated “paleochannels” in the region with the help of ISRO’s satellite imagery. As per the master plan, figure 4 of the report shows the paleochannels. The Master plan completely ignores this aspect. To adopt such a Master Plan can lead to serious disasters.

* The “Environment Strategy” portion of the Master Plan is somewhat simplistic as it not only ignores the flood threat, the drainage risk and vulnerability to other ecological risks but it also ignores the environmental situation that exists around the capital city region. For example, the huge coal-based thermal power plant at Ibrahimpatnam nearby has high chimneys spewing toxic pollutants which include mercury, lead, cadmium, arsenic, sulphur, radioactive uranium and thorium and other pollutants. Since the tallest multi-storeyed buildings in the capital city would still be within the command of these chimneys, it could pose a serious health hazard for the residents of the capital city.

According to CPCB’s National Ambient Air Quality studies, Vijayawada industrial complex has been categorised as “critical” in terms of PM10 pollutants. The capital city is close to it. If additional electricity generation facilities are proposed to be set up near the capital to cater to its own power requirements, it will further aggravate the situation.The Master Plan blissfully ignores such crucial factors.

* The TOR (prescribed by the Union Home Secretary) cited above refers to the need to rehabilitate and resettle (R&R) the displaced population. The displacement process in the case of Amaravati involves not just land owners but also tenants, agricultural workers, landless encroachers of government lands, artisans and other auxiliary population who depend on the aggrarian economy in that region. The State has adopted an R&R policy and the Master Plam makes no mention of the R&R measures.

The national norm (see the National Urban Housing and Habitat Policy 2007 & JNNURM Guidelines issued by the union Ministry of Urban Development) in all city Master Plans requires allocation of land for Economically Weaker Sections (EWS) to the extent of 20-25% of each lay-out area. In most AP city Master Plans, the norm adopted is a minimum of 10%. As against this, Section 53(1)(c) of the APCRDA Act has prescribed at least 5% of the lay-out area for EWS, whereas it ought to have been in line with the national policy.

Unfortunately, the foreign consultants who have prepared the Master Plan prepared are unaware of this norm and they have therefore totally ignored it. Apparently, the APCRDA officers are also equally ignorant of this norm, as otherwise they would have insisted that the consultants should keep it in view.

No city in India can come up without thousands of migrant workers taking part in the construction activity. Nor any city can survive without thousands of auxiliary population (domestic helpers, electricians, carpenters, vehicle drivers and so on) maintaining the city’s upkeep and maintenance. They usually constitute 20-25% of the city’s population and the national norm is based on it. Ignoring their existence and failing to plan for their resettlement will create an Amaravati of slums. Master Plans cannot remain “plans for masters” who live in A/c rooms. They are equally meant for the common folk without whom the city cannot exist.

* The Master Plan fails to evaluate different alternatives in terms of resource intensities, as for example, water intensity, energy intensity etc. By not attempting such an evaluation, it appears that the Master Plan would result in the development of an urban agglomeration that is highly resource intensive (high rise buildings are energy intensive). While old cities have lost the opportunity of minimizing the use of resources, the advantage of plannig new cities lies in adopting resource-effective alternatives. By ignoring this aspect, those who have prepared the Master Plan have deprived APCRDA of an opportunity to plan a city based on minimal resource intensities.

* The Master Plan, if it were to be a sound working plan, should have meticulously documented all the natural features of the capital city region, such as, the hills, the water bodies, the water courses, the wetlands, the floodplains, the paleochannels, the notified and the “deemed” forests, the archaeological sites evidenced, identified and excavated and so on. In the absence of the same, the Plan has no practical value and, more important, it is likely to mislead the APCRDA planners into committing grave, irreversible mistakes that will adversely affect the future generations.

“I feel that APCRDA authorities are in far too much of a hurry to finalize the Master Plan rather than examine the same in consultation with individual experts and institutions in India adept at urban planning. They should be advised to convene a meeting of all such individuals and institutions, seeking their inputs before proceeding with the finalization of the Master Plan,” he said in the letter.