The Election Commission has served notice to Telangana Chief Minister K. Chandrashekhar Rao for violating the Model Code of Conduct for making “derogatory” remarks against Hindus in his speech at an election rally.

The poll panel, which received a complaint from Vishwa Hindu Parishad (VHP), has found that Rao’s remarks had the “potential to disturb harmony and aggravate the existing differences between social and religious communities”.

The panel in its notice said it was prima facie of the opinion that by making the statement and appealing to communal feelings, Rao violated the Model Code of Conduct.

It asked the Telenagana Rashtra Samithi (TRS) chief to submit an explanation on or before April 12.

KCR, as Rao is popularly known, made the remarks during an election rally at Karimnagar on March 17.

VHP state chief M. Rama Raju had lodged a complaint against KCR with the Chief Electoral Officer the next day. 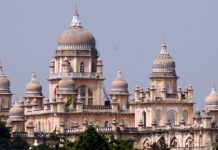