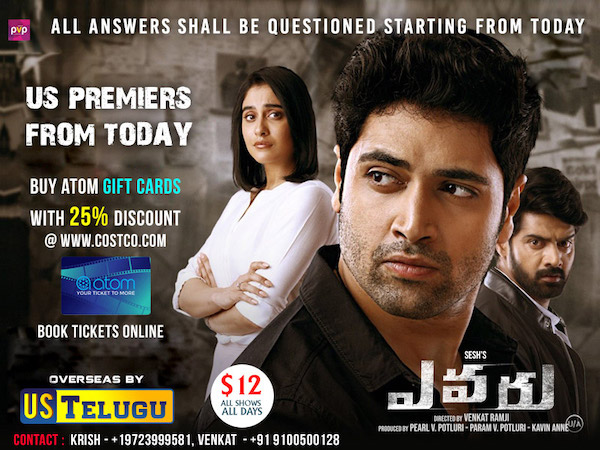 It’s the time to get intrigued and be wowed! Actor Adivi Sesh’s much-awaited Evaru is finally set to release with premieres being held across the US Today!

The leading distributor of Indian cinema overseas, US Telugu, is the giving the film a grand release in the US starting from today’s premieres.

Directed by Venkat Ramji and starring Regina Cassandra as the female lead, expectations on the film are already high ever since the trailer was released.

With Sesh’s earlier films like Kshanam and Goodachari leaving the audience in amazement, the buzz around these films has been pretty intense and full of curiosity with everyone expecting the actor to deliver something interesting just like his earlier ventures. Sricharan Pakala music is next level to Goodachari.

Bankrolled by PVP Cinemas, the film is a thriller. Watch it at your nearest screens today!

Book your tickets now. You can avail a 25% off on ATOM gift cards at www.costco.com.

For any information please reach us at: