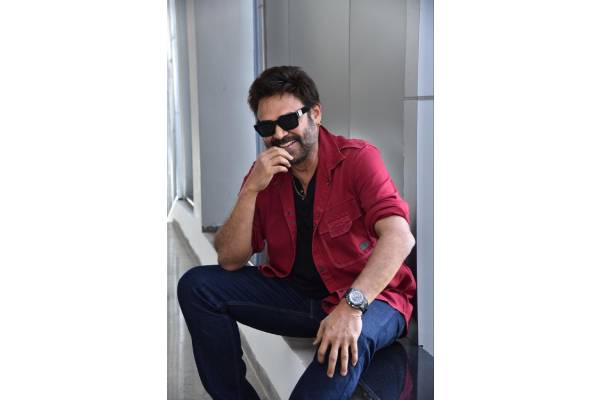 Victory Venkatesh’s energy not only remains the highlight of F3 but also of the promotions of the movie releasing on the 27th of this month. The Superstar has interacted with Print and web media today about Anil Ravipudi’s directorial.

“I get unique energy whenever I am doing comedy. It feels like college days. I naturally have fun with everyone. Audiences also love to see me like this. After a gap of two years, it is a pleasure to come up with a Big Entertainer like F3. It’s a kick to see such entertainers with the family,” Venkatesh said.

“F2 was a big hit. The audience loved the movie and the characters. Definitely, they want more entertainment from F3. The F3 has a triple dose of entertainment that does not fall short of the audience’s expectations,” the Superstar assured.

He also narrated the difference between F2 and F3. “More fun is added to F3. Many actors have been added. The film is very lavish. There are so many good sequences. F3 has more fun than F2,” Venkatesh added.

He also revealed how the character of F3 is quite opposite in the real life. “My character in F3 is the exact opposite to what it is in real life,” he says. However, he still narrates how he works hard to ensure the comedy works. “Every dialogue has to be improvised. Sometimes a kind of fun arises in the voice itself. So, I try to give better than what the director has,” he says.

Venkatesh who sounds confident about the movie says his next films are solo movies for Sithara Entertainments and Mythri Movie Makers.