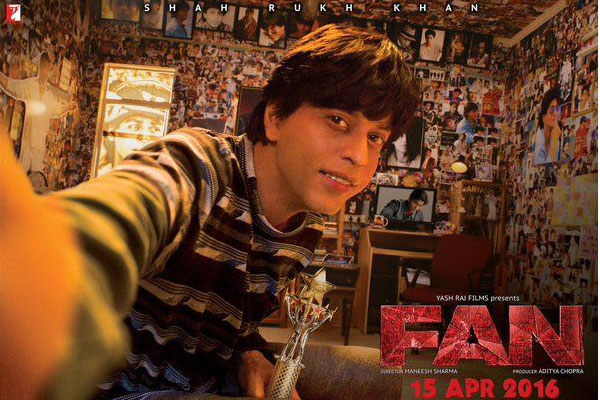 Almost a decade after Shah Rukh Khan’s last sensible film “Chak De” comes “Fan” one of the most riveting films in his career which will set him apart once again as a high-potential actor. While the promos and the trailers before have given away much of the plot away, the story is of thrilling, incredible variety something that has never, ever been attempted before despite a plethora of films that refine the fan-star relationship since ages. In that sense, the story hits a raw nerve but manages to give a convincing treatment for the most part except parts in the middle and in the climax.

The story
Gaurav Chandna (SRK) is a twenty-something Delhi urban youth who is a die-hard fan of Aaryan Khanna (also played by SRK) who revels in living out and acting out like the superstar. After gaining stardom in his colony as a “Junior Aaryan”, he sets out on a mission to greet the Superstar on his birthday with some local delicacies and the trophy he won with enough fanfare and enthusiasm. His enthusiasm falls flat when he does catch a glimpse of the Star but fails to make eye contact with him and neither does he make it to the insides of his mansion. Gaurav doesn’ lose his grit to establish contact with AK. Instead, he becomes famous for trolling on the twitter handle of an upcoming hero Sid Kapoor who abuses AK of beating him at a brawl because of insecurities. Not just that, Gaurav succeeds in tricking Sid to apologise to the Superstar for his careless banter. The story takes a twist here in an unexplained manner which makes the Star Shah Rukh Khan tame the Fan Gaurav Chandna in the most unexpected settings. This breaks the heart of the Fan who spared nothing in rooting for the Star all his life, and defending him against all and sundry. The block at the interval sets it up now for a reversal in sentiments from the side of Gaurav. Instead of going after AK, Gaurav’s only mission in life is to ensure the Star runs after the Star in one bizarre act after another. The second half is all about the exciting way in which Gaurav aces up on his matinee idol with actions that speak louder than words – resulting in a series of episodes which defame the Star in public forcing him to seek out Gaurav. The scenes and the stunts which follow in the second half beat anything you have seen in an SRK film (even Don) until the blinder of a climax.

How Good is it?
Maneesh Sharma as the director has given one of the most gripping stories in recent times on the hypothesis of what happens when a Fan becomes more sought-after than the Star himself. In 146 minutes, the film aided by an unfamiliar Background score by Osea and a dazzling screenplay by Habib Faizal delivers on the excitement promised by SRK of being a complete film in which there are no songs, no romantic tracks, no ice-candy scenes and no nonsensical comedy. Fifteen minutes after the film started, and you see the first frame in which the Fan and his Star share the screen, you get sucked into the story in which Shah Rukh Khan dominates in the most defining role he took in a long, long time. With a prosthetic makeup of an imperfect face which looks like the face of a Superstar and a boyish body frame that looks forty per cent smaller than the Superstar himself, SRK essays the title role of FAN Gaurav Chandna brilliantly – he shows the mind of an unfettered madcap youth who is consumed by fan-flame that consumes him eventually. Of course,  SRK plays himself too maturely with all the balance of aggression and restraint to rein in emotions of extreme reaction that his public actions, of late, have generated. The film’s main plot and essence is to elevate the life and times of the Fan, not the Superstar who impacted the former, and to that extent, some of the best scenes of the film showcasing the two of them end up making you take the side of the Fan. There is an intrinsic goodness and throbbing of the heart you feel for the Fan towards the end but for his menacing streak of acrimony which brings down the house for the Star. On the whole, the movie is a one-time watch with a surprising strength in the story and an unconventional twist which makes the audience turn judge in the end, almost like an Ayn Rand saga.

Technicalities:
While the film has an international look in the way the script and screenplay are treated and the crew of technicians who let their craft speak in the OST, cinematography, stunts and sets, the film appears slow at times. This is because there is no other excursion organised by the director while narrating the story of confrontation between the Star and his Fan. Despite a flourishing script and tight narrative, Maneesh Sharma misses many opportunities to iron out glitches in screenplay. For instance, the relentless misunderstanding between the Fan and his Hero could have been better handled: someone forgot to tell the director to sort out the misunderstandings where it all began – in the OB Van of actor Sid Kapoor! Similarly, at many crucial scenes in the second half, there were blink-and-miss action and emotive scenes where Gaurav passes off as Aaryan Khanna and vice-versa which are quite weird. Could that be an act of screen magic or an act of Director God with help from makeup crew? The scenes that show how the Fan makes it to Croatia and England are also matter-of-factt and quite dramatic but they get eclipsed by the force of the spin given by the Fan to score a point.

In summary, the film is different, intense and action-studded with powerful performance by SRK in both the roles. As a star, he is rock-firm in his resolve not to say “Sorry” till the very end. But the FAN steals the show and wins the hearts of all the fans with his guileless performance without the ibby-jibbies that SRK is notorious for. The ending may not resonate with audiences used to South-Indian sensibilities of cinema but overall the output is a neat watch. You rarely get an acting treat from a Superstar who parks all the elements of commercial cinema into a closet for the sake of his FAN.