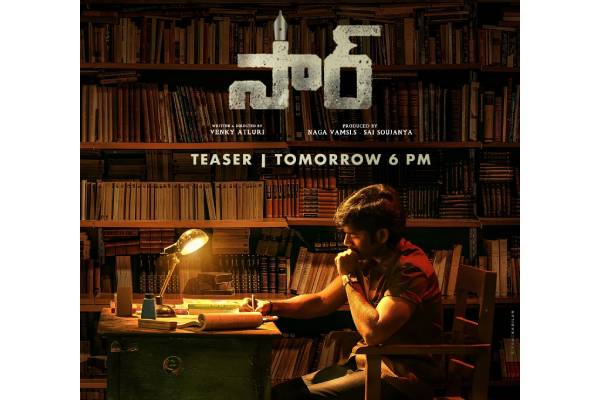 Tamil actor Dhanush is doing a straight Telugu film for the first time and the film is titled Sir. The film is said to be a satire on the current education system and is about how a youngster revolts against the system. Venky Atluri is the director and the shoot of the film reached the final stages. The first look of Dhanush from the film is out. Dhanush is completely occupied in writing in the released poster. The teaser of Sir will be out tomorrow evening at 6 PM. The film will head for a release soon in Telugu and Tamil languages later this year.

Samyuktha is the leading lady and Samuthirakani will be seen in a prominent role. Top technicians of South Indian cinema are a part of the project and GV Prakash Kumar is the music director. Sithara Entertainments, Srikara Studios and Forture Four Cinemas are the producers. Dhanush is expected to complete the shoot of Sir very soon. He signed his next film in the direction of Sekhar Kammula and the shoot commences next year.