Former Prime Minister Atal Bihari Vajpayee, a moderate face in saffron politics and the first non-Congress prime minister to complete a full term in office, died here on Thursday after a prolonged illness, AIIMS authorities said. He was 93.

“It is with profound grief that we inform about the sad demise of former Prime Minister Atal Bihari Vajpayee at 5.05 p.m. on 16.08.2018,” an AIIMS press statement said.

The statement said Vajpayee was admitted on June 11 and was stable in the last nine weeks. “Unfortunately, his condition deteriorated over the last 36 hours and he was put on life support system. Despite the best of efforts, we have lost him today.”

Vajpayee, a diabetic patient, was undergoing treatment at the All India Institute of Medical Sciences (AIIMS). His condition worsened further on Wednesday evening with leaders from across the political spectrum thronging the hospital and enquiring about his health.

The former Prime Minister, whose birthday on December 25 is celebrated as Good Governance Day, was honoured with the Bharat Ratna in 2014 at his home.

He was Prime Minister for 13 days in mid-1996 when he was forced to resign ahead of the confidence vote for which he did not have the numbers.

Vajpayee again became the Prime Minister in March 1998 but his government fell 13 months later on the floor of the Lok Sabha losing by one vote in the confidence motion after AIADMK headed by the late J.Jayalalithaa withdrew support to the BJP.

The BJP government headed by Vajpayee returned to power in 1999 and completed its full term till 2014. 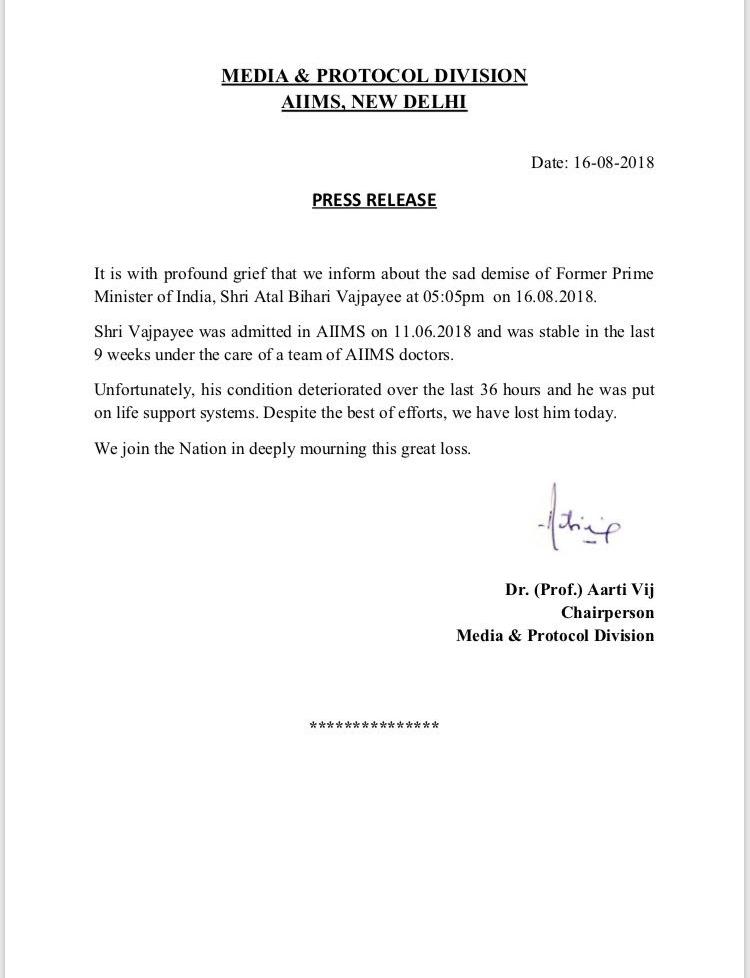