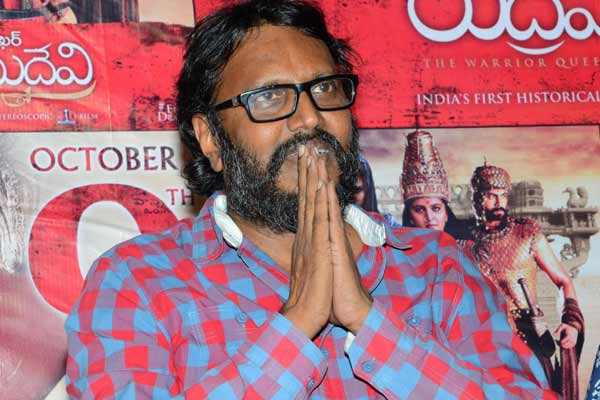 Director Gunasekhar who is also the producer of his prestigious project Rudramadevi has went through many ordeals for last two years to come with his high budget film. Due to many reasons, the film was postponed several times and increased his budget by crores. However, on Thursday a day before the film’s release he was relieved as Telangana government exempted the film from paying entertainment tax.

Guna will be approaching Andhra Pradesh chief minister Chandrababu Naidu on Friday to request him to grant tax exemption on his period film. However, Tollywood bigwigs are crossed their fingers whether AP government will accept his request or not as the film was based on the warrior queen of Kakatiya dynasty which comes in Telangana.

Popular director Rajamouli too requested on his official twitter account that the AP government should also help the film. “Just heard that #Rudhramadevi has been made tax free in Telangana. Fantastic news for Gunasekhar garu who has been swimming against the current for such a long time to bring this epic to film. Rudramadevi is a queen for all Telugu land.I think even the govt of AP should and will exempt this film from tax. All the best to everyone involved in Rudramadevi..” Rajamouli tweeted.

Rudramadevi is all set for massive release today. Anushka plays the main lead while Rana and Allu Arjun plays the other crucial roles in the film.